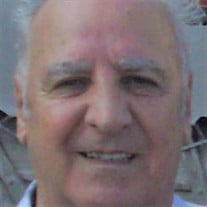 George Joseph Steppello Jr. Born in Queens, New York, November 20, 1931. At 90 years of age, passed away comfortably with his family by his side on April 22, 2022. Per George, “I was the longest living, and last man standing, of the Steppello Family.” George has always been a loving and generous man. He loved and admired his father, who would spend a lot of time with him, his brothers, uncles and the neighborhood boys after school. George Sr. taught them boxing, weight lifting, and bike riding. George often would go on 100 mile bike rides with his dad, sometimes from New York into Philadelphia. George Volunteered to serve his country in the Army during the Korean War. He also served in the Special Services, where he was on a Search, Rescue, and Recovery Team for Fallen Aircrafts. He worked over 40 years with the I.B.E.W. as an Electrician in New York City on many of their famous buildings and proudly belonged to the Local #3. Born ahead of his time, he was fascinated with electrical gadgets of all kinds, and enjoyed learning skills on his computer that he would love to encourage people to learn as well. He was preceded in death by his first daughter he lost at birth, father George Sr., mother Nettie, beloved daughter Theresa, brothers: Victor, Michael(Ola), Robert, sister Ann (Tony Yotkois), Niece Judy(Doug Mullins). George is survived by many cousins, nephews, and nieces, he will be remembered as “Great, Great, Uncle Georgie,” with his cute tummy pillow, his strong love of his family, teasing, phone calls, fun toy packages and projects, Halloween shenanigans, video taping of family events, emails and his love of the smiling emojis. He is remembered too by his much loved family friends who were like a son and daughter to him, Stanislaw & Elzbieta and their two children, who were like grandchildren to him, Christopher and Joanna Jelesnianski and their extended family. George would tell his family of the many wonderful meals Elzbieta would prepare and how incredibly delicious they were. “Grandpa” George proudly attended the kids sporting and school events, holidays and birthdays. He is a true friend, family member and gentleman who will never be forgotten. Finally, “The Babe,” George’s good and faithful pet dog of over 13 years will miss him, and to George's delight is able to carry out his life. A military funeral service will be held at the Atlantic County Veterans Cemetery in Estell Manor on May 2, 2022 at 10am. In Lieu of flowers, please donate to a Pet Rescue of your choice. George’s catch phrase at the end of a phone conversation/email: “OK Then, And Have A Happy!...”

The family of George Joseph Steppello Jr. created this Life Tributes page to make it easy to share your memories.

Send flowers to the Steppello family.