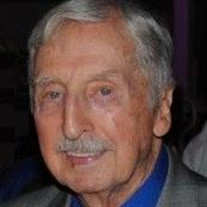 Schwartz, George, 92 of Absecon, passed away on November 14, 2016. He was born in Philadelphia, PA, June 1, 1924, to George and Elizabeth Schwartz. As a young man eager to serve his country, he enlisted in the US Army. George proudly served for three years, 1942-1945, during World War II and fought in five battles throughout Europe and North Africa. Upon his return, he attended and graduated from the Philadelphia Fire Academy, and began his career as a fire fighter. During his 24 years on the Philadelphia Fire Department, he worked at Ladder 5, and later was stationed at Engine 64 in Lawndale until his retirement in 1974. George moved his family to Wellsboro, a beautiful mountain town in upstate Pennsylvania where he worked for 10 years as Forest Fire Warden for the State of Pennsylvania. In his spare time, he did carpentry work and completely remodeled the family’s 100 year old farm home. After his retirement from the Bureau of Forestry in 1987, he and his wife, Betty, moved to South Jersey to enjoy his retirement, first living in Northfield and most recently in Absecon. George and Betty were married on November 3rd, 1956 in Philadelphia. In his younger days, he and wife Betty enjoyed jitterbugging at clubs in Philadelphia. Later, in their retirement, they enjoyed traveling to many places including Ireland, Germany and Canada. More recently, George enjoyed spending time with his family and grandchildren, making birdhouses, decorative wooden sleighs for Christmas, and taking longs walks. He was an Honorary Member of the Rockledge, PA, Fire Company, the American Legion (Post #686), the Veterans of Foreign Wars (Post #9462), the League of Sacred Heart of Jesus, and the St. Bernadette Senior Citizens Club. George is preceded by his loving wife, Elizabeth Ann (Murphy) Schwartz, his four sisters: Marge Santangelo, Jane Rosso, Ellen August, and Betty Ann Pfeifer, and his loving parents, Elizabeth and George Schwartz. He is survived by his son, George Schwartz (Nicole) Manheim, PA, daughters Eileen Schwartz Foster (John) of New Gretna, Patty Town (David) of Absecon, and Elizabeth Bernal (John) of Egg Harbor Township; his seven grandchildren Tim Foster, Nicole Foster, Alex Town, Ian Bernal, Daniel Bernal, Sophia Schwartz, and Madeline Schwartz; and his many loving nieces and nephews. A viewing will be held at 8:30 AM on Saturday, November 19th followed by a funeral mass at 10 o’clock at Church of the Assumption at 146 S. Pitney Road, Galloway, NJ. The burial will follow at the Atlantic County Veterans Cemetery at 393 NJ-50, Mays Landing, NJ. In lieu of flowers, the family requests donations be made in memory of George Schwartz to the IAFF Local 22 Widow’s Fund, 415 N. 5th Street, Philadelphia, PA 19123-4095.

Schwartz, George, 92 of Absecon, passed away on November 14, 2016. He was born in Philadelphia, PA, June 1, 1924, to George and Elizabeth Schwartz. As a young man eager to serve his country, he enlisted in the US Army. George proudly served... View Obituary & Service Information

The family of George H. Schwartz created this Life Tributes page to make it easy to share your memories.

Send flowers to the Schwartz family.