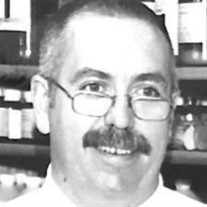 George B Moore “GeBe”, of Egg Harbor City, NJ, passed away on Monday evening, March 8, 2021 peacefully with his wife, Peggy, of 56 years by his side. He was born in Atlantic City, NJ on November 15, 1943 and attended Atlantic City High School, Rutgers, Glassboro State College, Millersville State College and MIT (Massachusetts Institute of Technology). GeBe and Peggy called Brigantine, NJ their home for more than 40 years, where they owned a Landscaping Business and raised their family. He taught Earth Science and Chemistry for 35 years at Atlantic City High School and also coached crew, golf, and basketball. He was a mentor to many new teachers & students alike. GeBe was known by many for various things including writing, cooking, music, fossils, woodworking, travel, gardening, bowling, cameras and photography just to name a few. He also was a tinkerer and loved computers and technology – being a consultant for Apple for many years. He was very talented in a lot of fields and an inspiration to many people, especially his family. One of GeBe’s greatest pleasures was sharing his vast knowledge with his grandchildren and nothing made him happier. He was preceded in death by his parents, George & Evelyn Moore. GeBe is survived by his loving wife, Peggy; his children, George (Anne), Lynn Peters (Kevin), and Gary (Joanne); and his grandchildren, Caitlin, Sydney, Kevin & Brady. A mass in his memory will be held on Sunday, June 20th at Our Lady Perpetual Help Parish in Galloway. Arrangements have been entrusted to Wimberg Funeral Home in Egg Harbor City. For condolences, please visit wimbergfuneralhome.com.

The family of George "GeBe" B. Moore created this Life Tributes page to make it easy to share your memories.

George B Moore “GeBe”, of Egg Harbor City, NJ, passed away on...

Send flowers to the Moore family.