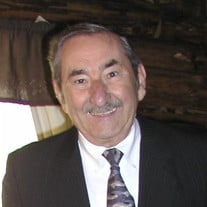 Gale, George A., 83 of Mays Landing passed away on Sunday, January 12, 2020 at home. George was born on August 3, 1936 in Egg Harbor City, NJ. He went to school in Egg Harbor City and spent his youth between Egg Harbor City and Weymouth. George served in the United States Armed Forces. He was proud to serve his country. After his time in Germany, he came home to meet the love of his life, Patricia Cooper. They married on November 28, 1959. George worked for NJ Transit as a bus mechanic and later as a shop foreman. He retired from NJ Transit after 32 years of service. George came out of retirement to drive a school bus for Atlantic County Special Services. He truly loved driving “his kids” to and from school every day. George was always happy and full of life. He loved socializing and meeting new people. George loved his dogs, his log cabins, dancing, traveling, going to the beach, trail-riding, camping, riding his tractor, cutting and splitting wood (his favorite pastime) and his horse, Winny. He was a member of the VFW Post 5043. He is predeceased by his wife, Patricia Gale; his mother, Mildred Chatten; and his father, George Gale. George is survived by his four children, Gary Langenstein (Nanette) of Smrnya, DE, Anthony (Tony) Gale, Donna Hare (Kevin), and Debra Raciti (Wally); his four grandchildren, Amanda, Virgil, Michael, and Robert; his great grandchildren; his brother, Harry Gale (Antoinette); and his cousins, Jayne and Patty Merlino. A gathering will be held on Thursday, January 16th from 5:00 to 7:00 PM with a memorial service at 7:00 PM at Wimberg Funeral Home, 400 Liverpool Ave, Egg Harbor City 609-965-0357. Interment will be Friday, January 17th at 11:00 AM at Atlantic County Veterans Cemetery in Estell Manor. For condolences and directions, please visit wimbergfuneralhome.com. In lieu of flowers donation may be made in George's memory to Wounded Warrior Project, https://support.woundedwarriorproject.org/Donate.

The family of George A Gale created this Life Tributes page to make it easy to share your memories.

Gale, George A., 83 of Mays Landing passed away on Sunday, January...

Send flowers to the Gale family.