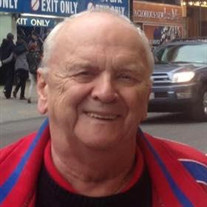 Fenwick, George Joseph III, (Dadad) 78 of Absecon, passed away at home on Wednesday, October 10, 2018, surrounded by his loving family, after a courageous battle with lung cancer. George was born and raised in Atlantic City, to George J. Fenwick Jr. and Anna “Abby” (Keller) Fenwick. George attended Holy Spirit in Atlantic City from the first grade and graduated in 1957. George entered the apprenticeship at IBEW Local Union 211 the same year, where he enjoyed a very distinguished career. George was proud to be Union and unendingly advocated for fair wages and treatment for all. George met Kathy Hackney on April 15, 1961 and, after only knowing each other for 3 months, they were married on July 15, 1961. George was a founding member of St. Elizabeth Ann Seton Church in Absecon, where he was a Eucharistic Minister. He was Recording Secretary of IBEW Local 211 for many years, and then as the Business Manager, he was responsible for the creation of the IBEW Local 211 Annuity Fund. He was also past President of IBEW Local 351 and the New Jersey State Electrical Workers Association. George was a lifelong Philadelphia sports fan, frequently attending Phillies games with the best men in his life: his grandsons, sons-in-law, and great-grandsons. He was so happy to witness the Birds win the National Championship in 1960 and Super Bowl LII in 2018. George relished the fact that so many women surrounded him throughout his life – his mother, three sisters, his loving wife, three daughters, his five granddaughters, and four great granddaughters. Every one of his granddaughters claimed herself as Dadad’s favorite, because when they were with him that is truly how it felt. He was predeceased by his parents and his 3 sisters, Margaret Crawford and her husband Jack; Judy Giordano; and Anne White. George is survived by Kathy, his loving wife of 57 years; 3 daughters – Kathy Doerr, Kristy (David) Torres, and Karol (Lanny) Cohen; 8 grandchildren – Meghann (Kelly) Griego, Johnny (Bethany) Doerr, Joey Doerr, Olti Celepija, Kaitlyn Torres, Abby Cohen, Rachel Cohen, and Olivia Torres; 7 great grandchildren - Mara Dawson, and Mason & Emmie Griego, Joshua, Jack & Lily Doerr, and Gianna Celepija; his granddogs, Ruby, Luna, Moose and Milly; and his grandkitties, Cassie and Kitty. George is also survived by his dear nephew, Frank (Robin) Fenwick and many nieces, nephews, sisters-in-law and brothers-in-law. Visitation of family and friends will take place on Monday, October 15, 2018 from 5:00 PM until 8:00 PM at Wimberg Funeral Home, 211 E. Great Creek Road, Galloway, NJ 08205 and again on Tuesday, October 16, 2018 (his late mother’s birthday) from 9:30 AM until 10:30 AM at St. Elizabeth Ann Seton Church, 591 New Jersey Avenue, Absecon, NJ 08201, with a Mass of Christian Burial at 11:00 am. Burial will follow at Laurel Memorial Park Cemetery, Tilton Road, Egg Harbor Township, NJ, 08234. Arrangements by Wimberg Funeral Home in Galloway 609-641-0001. For condolences, please visit wimbergfuneralhome.com.

Fenwick, George Joseph III, (Dadad) 78 of Absecon, passed away at home on Wednesday, October 10, 2018, surrounded by his loving family, after a courageous battle with lung cancer. George was born and raised in Atlantic City, to George J. Fenwick... View Obituary & Service Information

The family of George Joseph Fenwick III created this Life Tributes page to make it easy to share your memories.

Send flowers to the Fenwick family.