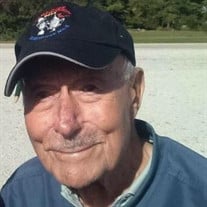 George “Skip” Favre, 90, of Egg Harbor City, NJ passed away, Tuesday, December 19, 2017 in Atlantic Care Medical Center. Skip was born February 22, in 1927 in Phillipsburg, NJ, he was the son of Marguerite Fieni. Always interested in the sea, he became a sea scout at age 15. A 1947 graduate of Egg Harbor City High School, he returned to complete his education after serving as a gunner mate 3rd class in the Navy from 1944-1946 on a YMS minesweeper during World War II. He married his sweetheart, Frances Favre, and began a long career in the boat building industry with Pacemaker Yachts. Skip became the Vice President of Production and was responsible for resolving many service issues in a million-dollar industry. When Pacemaker closed, he briefly managed “The Yard“ which provided boat storage and service. He then worked for Ocean Yachts until his retirement. In his youth, he was a member of the Mullica River Water Ski Club, enjoyed snow skiing, hunting and his deep-sea fishing trips. Loving the outdoors, he became an avid golfer and member of the Pin High Golf League in his later years. He was a member of the Egg Harbor Kiwanis and with Key Rec built the fields and tennis courts. He enjoyed his morning coffee with his buddies at Towne Paint, bi-weekly dinners with the Goodfellows, working with the “ground crew” at St. Nicholas Church and participated in the VFW parades each year. He was predeceased by his mother, Marguerite, his stepfather, Victor, and his son, Roy Favre. He will be deeply missed by his loving wife, Frannie, children Janice Strigh and Glen Favre (Tina), grandchildren Meghan Allison (Dave), Christine Truax (Nick), Shelby Favre, Bret Favre, and Jake Favre, and 3 great-grandchildren. A visitation will be held at Wimberg’s Funeral Home, 400 Liverpool Ave, Egg Harbor City 609-965-0357 on Tuesday December 26th from 11:30am to 1:15pm. The service will begin at 1:15pm. Interment will immediately follow at Egg Harbor City Cemetery. In lieu of flowers, donations may be made to the charity of your choice. For condolences or directions, please visit wimbergfuneralhome.com.

The family of George "Skip" Favre created this Life Tributes page to make it easy to share your memories.

Send flowers to the Favre family.