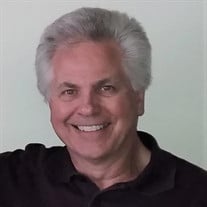 Frank J. Piotrowski Jr., 70 years old, of Galloway, NJ, passed away on March 15, 2021 at his home with his wife by his side. He is survived by his spouse, Veronica (Ronnie), and his mother, Helen Piotrowski. He is predeceased by his father, Frank Piotrowski Sr. and his brother, Stanley Piotrowski. Born in Philadelphia PA, Frank attended Drexel University where he received a BA in Engineering and an MBA in Business Administration. His appetite for learning continued long beyond his university days. He learned web design, and became quite a tech wizard, developing and maintaining numerous websites that helped his community and friends communicate and share. His career was spent in the Oil industry in a myriad of executive engineering roles that kept the couple moving to facilities throughout the US and abroad. A 4-year assignment in Stavanger, Norway was the ultimate adventure for Frank, who was always open to a new challenges and experiences. Retiring early, his spirit of adventure continued, as Frank and his wife of 45 years Ronnie pursued their shared love of travel, particularly cruising. They had already enjoyed 8 Viking cruises, and were eyeing an exploration cruise to Antarctica once COVID travel restrictions were lifted. Frank was passionate about music. He played one of his 5 guitars daily. You’d never see Frank out for a walk without his Walkman, replete with a staggering catalogue of tunes. Retiring to his beloved Jersey Shore allowed Frank and Ronnie to take advantage of the lively concert scene, which he relished. A man of great strength and courage, he was at peace with his mortality. In his last days, he penned a farewell message which recounted not only his satisfaction for living a full life, but his appreciation to his friends for the contributions they’d made to his life’s story. If you were fortunate enough to have known Frank, you’ll recall his smile, his twinkling eyes, his great sense of humor, abundant talents and deep-rooted sense of integrity. Frank was a world class husband and a devoted son. He will be forever loved and cherished by his wife and mother, and deeply missed by his sweet cat Tina. Arrangements have been entrusted to Wimberg Funeral Home, 211 E. Great Creek Rd., Galloway, NJ 609-641-0001. For condolences, please visit wimbergfuneralhome.com. Memorial services will be held privately. Donations can be made in Frank’s name to a charity of your choice.

Frank J. Piotrowski Jr., 70 years old, of Galloway, NJ, passed away on March 15, 2021 at his home with his wife by his side. He is survived by his spouse, Veronica (Ronnie), and his mother, Helen Piotrowski. He is predeceased by his father,... View Obituary & Service Information

The family of Frank J Piotrowski Jr. created this Life Tributes page to make it easy to share your memories.

Send flowers to the Piotrowski family.