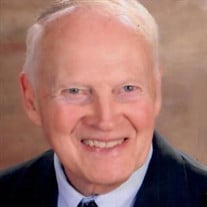 Francis John Blee, Sr., 88 of Absecon, N.J., peacefully passed away on April 1, 2020. He attended West Catholic High School and graduated from Egg Harbor High School. He graduated from the University of Pennsylvania Wharton School of Business. He obtained a Master’s Degree in economics from Temple University. He completed his course work for a PhD in Economics from the University of Pennsylvania, Wharton School of Business. As his life progressed, our father started on his journey of spirituality. Frank obtained a Masters Degree in Pastoral Counselling from Neumann University. He also obtained a Master’s Degree in Theology with his beloved wife, Addie, at LaSalle University. The ultimate example of faith and devotion to God is that for three years he took the New Jersey Transit Bus and New York Subway to Fordham University where he obtained a Doctorate Degree in Systematic Theology. Frank proudly served with the 24th Infantry of the U.S. Army in the Korean War. He achieved the rank of 1st Lieutenant and graduated first in his class from Officer Candidate School. Upon his return from the War, he was a Financial Analyst for Smith, Kline & French Corporation in Philadelphia. He then started his own financial company, Beach, Widman & Blee which pioneered investment research for money managers. He returned to Smith, Kline & Glaxo and finished his business career as a Corporate Economist. Following his business career, he committed to a life of service to others. Frank was a Certified Addictions Counsellor working in the Atlantic City Housing Authority Complex at Maryland Avenue in Atlantic City. In addition, he provided spiritual and pastoral counselling to many people from his home. He served as Dean of Evangelization and Adult Faith Formation for the Diocese of Camden. Frank was a Member of the Order of St. Gregory the Great which is one of the five Orders of Knighthood of the Holy See. The honor is bestowed upon Roman Catholics in recognition of their personal service to the Holy See and the Roman Catholic Church. Frank was a Fourth Degree in the Knights of St. Columbus. He was a former President of Parish Counsel for Assumption Church in Pomona. He was a founding member and trustee of St. Elizabeth Ann Seton Parish. For many years, he taught CCD at St. Elizabeth Ann Seton and also served as a Eucharistic Minister. He also provided adult instruction, conducted numerous retreats and bible studies. He was a founding member of Absecon Social & Athletic Club and coached instructional basketball for many years. He is predeceased in death by his loving wife of 65 years, Adeline M. Blee, his parents Evelyn and Francis Blee, Sr., his sister and brother-in-law, Mary and Don Morgenweck, his brother-in-law and sister-in-law, John (Sonny) Falivene, Jr. and Theresa (Tessie). Frank is survived by his four children, Denise (Savas Mercouriou), Frank (Kathy Sherma), Mike (Sylvana Viola) and Bob (Jan Kozlovsky); his 10 grandchildren, Madeline, Caitlin, Peter, Samantha, Mike, Francesca, John, Shannon, Mary and Nicholas; and his six great grandchildren, Jayden, Bailey, Adeline, Emma, Freddie and Poppy. Our father devoted his life to glorifying the Lord. His life was an inspiration and testament to faith, love and service. He worked faithfully in every aspect of his life to advance the kingdom for which Jesus gave his life. We are comforted in knowing Dad is with Our Lord, our mother and the angels that surrounded his peaceful passing as he began the journey to his eternal reward. A memorial mass and celebration of life will be held on Saturday, September 11th at St. Elizabeth Ann Seton Church at 11am. In lieu of flowers, donations may be sent to the Stanley W. Marczyk Scholarship Foundation, P.O. Box 852, Absecon, NJ 08201. Arrangements have been entrusted to the Wimberg Funeral Home, 211 E. Creek Road, Galloway. For condolences please visit wimbergfuneralhome.com. Mass will be livestreamed https://webcast.funeralvue.com/events/viewer/58828

Send flowers to the Blee family.