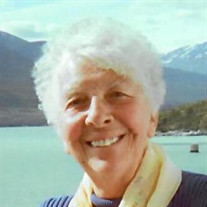 Sr. Frances Karovic, The Missionary Sisters of the Immaculate Conception mourn the loss of their Sister Frances Karovic, SMIC who died peacefully on December 30, 2019, at the age of 79 at home in Galloway, New Jersey. Sister Fran was born in Queens, New York on May 27, 1940 to Frank and Emily Karovic. She was preceded in death by her mother and father; her step mother, Valeria Karovic; her brother, Frank S. Karovic; and step sister, Theresa Hamilton. She is survived by her sister-in-law, Diana Karovic; nieces, Virginia Amejka, Valerie Cherry and husband, Danny Cherry; nephew, Frank E.Karovic and wife, Christine Karovic; great niece, Emilie Karovic; great nephew, Blayke; as well as many family members and life long friends. Sister Fran entered the Missionary Sisters of the Immaculate Conception of the Mother of God in 1959 in West Patterson, NJ. She earned an Associate of Arts degree from Tombrock College and attended The Sacred Heart Dominican College in Houston, Texas earning a B.S. in Nursing. She also attended Columbia University in New York City earning an M.S.N. Community Mental Health degree. The latter included a two year grant. Sister Fran’s lifelong Missionary work was devoted to Nursing, taking her to Guanay, Bolivia, where she worked as a Clinic Nurse. Back in New Jersey, she associated herself with Barnert Memorial Hospital, Essex County Hospital Center, and Veterans Adminstration Hospital in East Orange, serving as a Psychiatric Nurse. She moved to California in 1976, where she worked as a Clinical Health Nurse Specialist at the Desert Community Mental Health Clinic in Blythe, California as well as Beaumont, California. After retiring in 1999, she volunteered her work to St. Kateri Tekak with parish and later to Carol’s Kitchen, feeding the hungry. Finally, in 2019, she was missioned to Galloway, New Jersey. Sister Fran loved to celebrate life in all its forms. She wished to express her deep love and gratitude to her family and friends. In her words: “Love knows no time, space, distance and never ends.” Sister Fran’s wake will be on Saturday, January 4, 2020 from 10am until 11am followed by a funeral liturgy at Our Lady of Perpetual Help Church, Galloway, NJ at 11am. Interment will follow in the cemetery of the Missionary Sisters on Rifle Camp Road, Woodland Park, New Jersey at a later date. All are welcome to attend and celebrate Sister Fran’s life. Condolences can be sent to [email protected], In lieu of flowers please send donations to the Popcorn Park Zoo 1 Humane Way, Forked River, NJ 08731. Services entrusted to the Wimberg Funeral Home, Galloway, wimbergfuneralhome.com

Sr. Frances Karovic, The Missionary Sisters of the Immaculate Conception mourn the loss of their Sister Frances Karovic, SMIC who died peacefully on December 30, 2019, at the age of 79 at home in Galloway, New Jersey. Sister Fran was born in... View Obituary & Service Information

The family of Sr. Frances Karovic created this Life Tributes page to make it easy to share your memories.

Sr. Frances Karovic, The Missionary Sisters of the Immaculate...

Send flowers to the Karovic family.