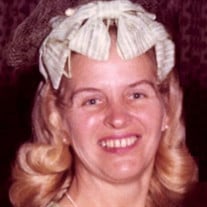 Evelyn E. Simpkins (Nee Ficken), 91, of Germania in Galloway Township in Atlantic County passed away on August 28, 2018. Born in Egg Harbor City in 1926, Evelyn was a graduate of Egg Harbor City High School class of 1943 and an area resident her entire life. For many years, she was an active member of the Moravian Church, the American Legion of Egg Harbor City, the Atlantic County 4-H, and the Cologne School PTA. She enjoyed travelling with her husband of 64 years and their many friends both within the United States and abroad. After the birth of her four children, Evelyn was employed in the catalog department of Sears, initially in Pleasantville, and subsequently at the Shore Mall. She especially enjoyed the regular lunch mini-reunions with her Sears co-workers held in various venues around the county. Evelyn was predeceased by her loving husband, William Henry Simpkins, a proud veteran of World War II, a Purple Heart recipient and a former Prisoner of War. Their entwined lives were spent in active support of the ideal of duty to and love of country. She is survived her four children, Carol L. O’Hara, (James), William H. Simpkins (Michele), David W. Simpkins, (Lois) and Michael W. Simpkins (Kirsten); her four grandchildren Keefe G. O’Hara, Samantha Day (Josh), David Simpkins, Jr. (fiancé, Christina), and Michael Simpkins, Jr.; her three great grandchildren, Sean O’Hara, Colbert Day and Rhys Day. Burial and a graveside memorial will be held at the Veterans Cemetery in the Atlantic County Park on Route 50 in Estelle Manor on Sunday, September 2, 2018 at 2:00 pm. In lieu of flowers, donations may be made in Evelyn’s name to the Wounded Warrior Project (support.woundedproject.org) or the Humane Society of Atlantic County. To pay respects, leave condolences and/or share fondest memories, visit wimbergfuneralhome.com. Services have been entrusted to Wimberg Funeral Home, Egg Harbor City, 609-965-0357.

Evelyn E. Simpkins (Nee Ficken), 91, of Germania in Galloway Township in Atlantic County passed away on August 28, 2018. Born in Egg Harbor City in 1926, Evelyn was a graduate of Egg Harbor City High School class of 1943 and an area resident... View Obituary & Service Information

The family of Evelyn E. Simpkins (nee Ficken) created this Life Tributes page to make it easy to share your memories.