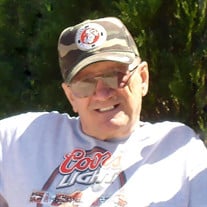 Eugene V. McFadden, Jr. 81, of Galloway passed on Wednesday, September 16, 2020. Born in Bayonne on June 25, 1939. He lived in Barnegat from 1977 to 2004. He was a proud U.S. Marine Corps Veteran. Predeceased by his parents, Eugene McFadden Sr. and Florence McFadden, sisters, Margaret “Peggy” Pepe, Maureen Allardice, and survived by his sister, Florence McFadden. He is survived by his loving wife of 57 years, Rose Ann McFadden; and their two sons, Eugene “Mick” McFadden and Dan McFadden, wife, Christine and their children, Justin, Sean, Lindsey, and Kelsey. Also survived by daughter, Kelly D’Ulisse, husband, Mark, and their son, Matthew. He was an avid sports fan, and his favorite players were definitely his grandkids. The family will be accepting visitors from 4 to 6 pm, followed by a brief service and Last Salute on Wednesday, September 23rd at the Wimberg Funeral Home, 211 E. Great Creek Rd., Galloway, 609-641-0001. For condolences or directions, please visit wimbergfuneralhome.com.

The family of Eugene V McFadden Jr created this Life Tributes page to make it easy to share your memories.

Send flowers to the McFadden family.