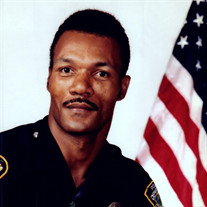 Solomon, Elwood, of Newtonville, NJ, departed this life on Sunday, November 3, 2019 at his home. He was born on August 16, 1944 to the late John and Lola Solomon of Harrisburg, PA. Elwood was one of 11 children. Elwood was born in Harrisburg, PA then later moved to Egg Harbor City. He was raised by Larkey Mays. He graduated from Oakcrest High School and also attended Rutgers University. Elwood joined the Church of the Living God, where he met his former wife, Mary Jane Moore (deceased). He worked at the boat company, while doing that he volunteered at the EHC ambulance squad. In 1977, he started his life long career as a police officer in Egg Harbor City. Then later he was promoted to Sergeant. Elwood was also an instructor for the Police Academy. He was a first responder at the tragic event of 911. Elwood retired from the police force in 2009 after 33 years. He was an American Heart Association faculty level instructor since 2013. Elwood was with AtlantiCare’s life support Training Center teaching BLS and Heartsaver courses for over 12 years. He taught for many of the local businesses, schools, and colleges in Atlantic County. Elwood belonged to the MRC of Atlantic County. He also started a business with Thomas Caucci called “Solomon Landscaping”. Elwood was a member of the Kiwanis Club. He enjoyed going to the Atco Raceway. Elwood loved antique cars and hosted a car show called “Crusin’ to the Beach”. In addition to his parents, Elwood was predeceased by his grandparents, Mr. and Mrs. Elijah Richardson; his four brothers, King David Solomon, John Solomon, Samuel Dockery and Raymond Cain; and one sister, Sylvia Solomon. Elwood leaves to cherish his memories his wife, Sally Solomon; his three daughters, Juanita Solomon Boyd (Frank) of AC, Janice Collier (Sterling) of EHC, Jacqueline Solomon of EHC; his two sons, Elwood Solomon Jr. of EHT and Jayden Solomon of Newtonville; his one brother, Paul Solomon (Patricia) of Florida; his four sisters, Diane Siplin of Trenton, Isabel of Trenton, Isabel R. Thompson (Jack) of Willingboro, Dolores Solomon of Mt. Laurel and Addie Dockery of Trenton; his ten grandchildren; his ten great grandchildren; and a host of nieces, nephews, cousins and an abundance of friends. A visitation will be held on Wednesday, November 13th from 5:00 to 8:00 PM and again on Thursday, November 14th from 9:00 to 11:00 AM with a service at 11:00 AM all at Wimberg Funeral Home, 211 E. Great Creek Rd, Galloway 609-641-0001. Interment will immediately follow at Egg Harbor City Cemetery. For condolences and directions, please visit wimbergfuneralhome.com.

Solomon, Elwood, of Newtonville, NJ, departed this life on Sunday, November 3, 2019 at his home. He was born on August 16, 1944 to the late John and Lola Solomon of Harrisburg, PA. Elwood was one of 11 children. Elwood was born in Harrisburg,... View Obituary & Service Information

The family of Elwood Solomon created this Life Tributes page to make it easy to share your memories.

Solomon, Elwood, of Newtonville, NJ, departed this life on Sunday,...

Send flowers to the Solomon family.