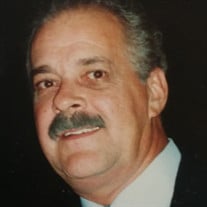 Ryan Sr., Edward John, 80, of Margate, passed away on Wednesday, July 18, 2018. Ed was born in Bristol, PA. on December 3, 1937 to Joseph and Elsie (Day) Ryan. Ed was raised in Absecon/Pleasantville where he graduated from Pleasantville High School in 1957. After graduating, Ed joined the U.S. Army and was stationed in Hawaii from 1958-1960 as an MP. After serving his country, he was honorably discharged and returned home to reside in Pleasantville. Several years later, he married Margaret Goulding and they raised their three children; Colleen (Jackson), Edward Jr., and Joseph. Ed’s career entailed working for Allegheny Airlines and U.S. Air at the Atlantic City Airport and Delta Airlines in Philadelphia for 20 years. He then worked in the Casino Industry for the next 30 years with 25 of those years being at the Trump Marina until his retirement. Ed was an avid Eagles and Phillies fan who was always rooting them on through every outcome. He also enjoyed playing and watching golf. He was pre-deceased by his parents, Joseph Ryan and Elsie Watt and his brothers Joe Ryan, Dan Watt and Sam Watt. Ed leaves behind to cherish his memories his life partner Ruth Moses of Margate. He also leaves numerous remembrances for his three children, Colleen Johnson (Jim) of Egg Harbor Twp., Edward Ryan Jr. (Elena) of Galloway Township, and Joseph Ryan of Atlanta, GA; three grandchildren, Aaron and Haley Johnson and Emily Ryan; sister, Patricia Salmon (Mike) of Mays Landing; sister-in-law, Francine Watt of Galloway; and seven nieces and nephews. Visitation and gathering of family and friends will be held on Saturday, July 21st at Wimberg Funeral Home, 211 E. Great Creek Road, Galloway, NJ (609-641-0001) from 10:00 am until 11:00 am. The service will follow with Pastor Heather Sugden at the Wimberg Funeral Home. In lieu of flowers, donations may be made in his name to his favorite charity, St. Jude Children’s Hospital in Memphis, TN. (www.stjude.org). For condolences or directions, please visit wimbergfuneralhome.com.

Ryan Sr., Edward John, 80, of Margate, passed away on Wednesday, July 18, 2018. Ed was born in Bristol, PA. on December 3, 1937 to Joseph and Elsie (Day) Ryan. Ed was raised in Absecon/Pleasantville where he graduated from Pleasantville High... View Obituary & Service Information

The family of Edward John Ryan Sr. created this Life Tributes page to make it easy to share your memories.

Send flowers to the Ryan family.