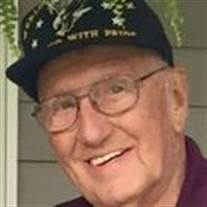 Lampe, Edward Alva, 94 of South Egg Harbor passed away peacefully at home on Wednesday, November 22, 2017. He was a Naval Veteran of World Ward II and served in the South Pacific. He retired as a Sheet Metal Superintendent of Philadelphia... View Obituary & Service Information

The family of Edward A Lampe created this Life Tributes page to make it easy to share your memories.

Send flowers to the Lampe family.