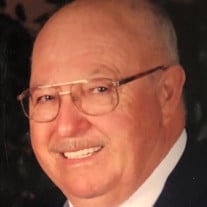 Edward Leroy Kolbe Sr, age 91 died peacefully at home with family by his side on November 2, 2021. Edward attended Atlantic City High School and later in life returned to school and earned a degree in fire science and fire code enforcement. He served the United States Army and the New Jersey National Guard. He was a member of the Sheet Metal Workers Local #27 and spent 25 years in the trade. While working in the trade, he moonlighted as Fire Marshall with the Absecon Fire Department. He also served as the first Atlantic County Fire Marshall for many years. After retiring from the trade he became the full time Fire Marshall for the Township of Hamilton, Atlantic County. After retiring from Code Enforcement, he and his loving wife moved to Brooksville, FL, where they made countless friends and enjoyed the next 25 years before returning to New Jersey to be with family in their final years. Edward was a Life Member of the Absecon Volunteer Fire Company. He was a proud Master Mason for over 60 years and a member of Keystone Lodge in Linwood, NJ. Ed was the former Grand Tall Cedar of Tall Cedars of Lebanon Atlantic City Forest #11. Edward is predeceased by his loving wife Maxine, whom he adored for over 67 years. He is survived by his five children, Stanley Kolbe and his fiance’ Trish Gonnelly, John Kolbe and his wife Vicky, Deborah Emmons and husband Ken, Edward Kolbe Jr and wife Dawn, Beth Kolbe-Dalfonso and fiance’ Joe Watt, 12 grandchildren and 18 great grandchildren, and his faithful 4 legged partner Sammie. Ed was also loved by Joann Schoenstein, Linda Sterling and Alice Fortis. A viewing will be held at Wimberg Funeral Home, 400 Liverpool Ave. Egg Harbor City, NJ 08215, on Tuesday, November 9th from 10:00am until the time of service at 11:00am. Burial to follow at Laurel Memorial Park Cemetery. Online condolences can be left for the family at www.wimbergfuneralhome.com. Arrangements by Wimberg Funeral Home, Egg Harbor City, NJ Please join us live by 10:35am Tuesday, Nov 9th to watch live by clicking the link: https://webcast.funeralvue.com/events/viewer/63443

Please join us live by 10:35am Tuesday, Nov 9th to watch live by clicking the link: https://webcast.funeralvue.com/events/viewer/63443

Send flowers to the Kolbe family.