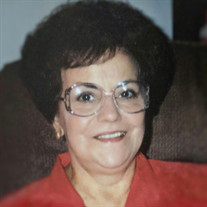 Edith Rose Morgenweck (née Petrilli) was a spirited figure in her extensive family up until her passing at age 92 on April 14, 2020. A lifetime resident of Egg Harbor City, NJ, she was the dedicated wife of the late Joseph "Gene" Morgenweck and devoted mother of her only son, Jeffrey Morgenweck and his wife, Joanne. Edith adored her two grandchildren, Chelsea and Dylan Morgenweck, whom she showered with endless love. She was also affectionately known as "Aunt Edie" to several generations of nieces, nephews and their children. Born in Egg Harbor City, NJ in 1927 to Ida and Joseph Petrilli, she was the youngest of five siblings; sister, Rita Petrilli Schwenger and brothers, Victor, Peter, and Henry Petrilli. Edith held many jobs as an adult, including secretarial work at her family's business, Joseph Petrilli Clothing Factory, Imperatore Draperies and Whitehall Laboratories from where she retired after many years. She lived a full life with summers spent at Brigantine Beach, enjoyed trips to the casinos in Atlantic City and playing piano duets with her sister, Rita. You could always count on Edith for her expertly wrapped gifts, her famous baked macaroni recipe and a prayer sent your way. Those who knew Edith would agree that her family was the most important thing in her life. She cherished any opportunity to spend time with a loved one and would often memorialize the occasion by snapping countless photos on her camera or saving a memento from an outing such as a cocktail napkin with a restaurant's name printed on it. Her home was filled with photos and memories that she would proudly show off to visitors; every one of us stood on our own pedestal in Edith's heart and she was never ashamed to brag about what her family was up to. There would always be a greeting card in your mailbox from Edith on every occasion, words underlined and emphasized along with a heartfelt message of her own at the end. They would always arrive early or right on time; Edith had likely never purchased a "belated" card in her life; a true testament to just how much she cared for and loved each of us. She will be most remembered for her strong will, her perfectly coiffed hairstyle, and her love of the St. Joseph's Wildcats. Edith had a great sense of humor up until the very end and recalling her colorful jokes, brings a smile to our faces. She will never be forgotten and her legacy lives on through every generation of immediate and extended family members who have all been touched by her love. She is survived by her son, Jeffrey Morgenweck (Joanne); grandchildren, Chelsea and Dylan Morgenweck; sister-in-law, Janet Golini; loving godchild, Peggy Sacco (Paul); nieces, Kim and Gianna Terpolilli, Terri Wellner, Lynn Palermo (Joseph), Michelle Mulholland (Paul), and Darlene Gilly; as well as nephews, Joseph Schwenger (Patti), Joseph "Jodi" Petrilli (Toni), Donald Morgenweck (Debbie), Victor Petrilli (Dianna) and Peter Petrilli. Edith will be laid to rest in Egg Harbor City Cemetery. Arrangements have been entrusted to Wimberg Funeral Home, 400 Liverpool Ave, Egg Harbor City, (609) 965-0357. For condolences please visit wimbergfuneralhome.com.

Edith Rose Morgenweck (née Petrilli) was a spirited figure in her extensive family up until her passing at age 92 on April 14, 2020. A lifetime resident of Egg Harbor City, NJ, she was the dedicated wife of the late Joseph "Gene" Morgenweck... View Obituary & Service Information

The family of Edith Rose Morgenweck (nee Petrilli) created this Life Tributes page to make it easy to share your memories.

Edith Rose Morgenweck (n&#233;e Petrilli) was a spirited figure in...