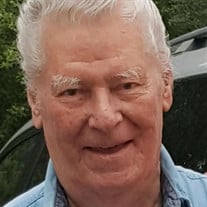 Hackney, Earl R &#8220;Bob&#8221;, 79, of Egg Harbor City passed away peacefully Tuesday, February 18, 2020 at AtlantiCare Regional Medical Center in Galloway Township, with his loved ones by his side. Bob is survived by his wife, Nancy (nee... View Obituary & Service Information

The family of Earl R. "Bob" Hackney created this Life Tributes page to make it easy to share your memories.

Send flowers to the Hackney family.