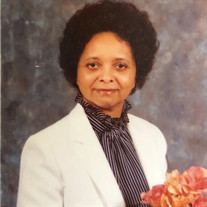 Doris Marie Moss Mays was born April 8, 1938 at Atlantic City Hospital. Her parents were Virginia and Walter Moss. Doris married Clifford Mays Jr and had five children Linda Duran, Clifford Ryan Mays III (Michelle), Kevin Mays (Janee), Markel Mays (Jessica), Faye Brooks (Tracy). Sisters Geraldine Williams, Diane Shiggs and brother Walter Irvin Moss. Doris loved her grandchildren, nieces, nephews, cousins and aunts. Doris attended Egg Harbor City High School and Atlantic Community College. Doris managed the financial services of Cliff’s Market Tarton Foods. In Cliff’s Market she had fifty percent interest. She designed the renovations for the market in 1967. In 1970 Doris was employed by Egg Harbor City Bank and Trust. Justin Dick head of Bank of the Board of Trustees handpicked her for Bank Teller. She was promoted from Bank Teller to Manager of the Drive In. There were five mergers in the 1980’s including a bank in Toms River where she was a manager. In 1985 Bishop Clifford Mays Sr requested her to raise funds for the church. In 1993 the Bishop requested her to raise funds for new bathrooms. Doris completed the renovations of the bathrooms in six months. Her grandmother Kate Moss approved Doris to join the church under Bishop Clifford Mays Sr. Doris worked alongside of Bishop Jessie White Senior Bishop of the Church of the Living God. She was church treasurer for many years. Her favorite songs were Peace Be Still by Reverend James Cleveland and There is Room at the Cross. She met Reverend James Cleveland in 1979 and arranged a financial contract to raise funds for Feed the Children Program of Bears Head and the western part of Atlantic County. The total cost at the time was 8,000. Doris covered the cost of the shortfall. The program concert was held at the Westside Complex in Atlantic City. Rev James Cleveland stated to Cliff her husband how nice she looked in her clothes. She was very strict on her children. They had to attend college. Doris really loved the Lord. As sickness weakened her she stated she wanted to live. That proved to Cliff that she was a real survivor in her beliefs. A visitation will be held on Saturday, May 22,from 1:00 to 1:30 pm with a service following at Wimberg Funeral Home, 400 Liverpool Ave, Egg Harbor City 609-965-0357. Interment will take place at Egg Harbor City Cemetery. Lovingly submitted, The Family Please join us for the service, which will be live streamed, by clicking on the link by 12:55 PM on Saturday, May 22nd; https://webcast.funeralvue.com/events/viewer/54486

Please join us live at 12:55 PM for the service by clicking on this link: https://webcast.funeralvue.com/events/viewer/54486

Send flowers to the Mays family.