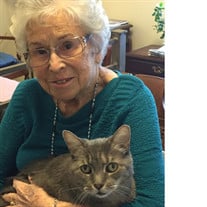 DOLORES HANCE - 94, of Egg Harbor Township, NJ passed peacefully into eternal life on Tuesday, November 22, 2016 at Spring Village in Galloway Township, NJ. Dolores was a woman of great determination, intellect and creativity who quietly accomplished much in her long life but chose to revel only in the successes of her beloved husband, Edwin, and daughter, Valerie. Born on May 21, 1922, in Elizabeth, NJ, Dolores Dudash moved as a young girl to the Jersey Shore. She graduated from Point Pleasant High School where she met the love of her life, Edwin Hance. They were married on April 29, 1944. Edwin was soon a naval officer fighting in the Pacific while Dolores did her part for the war effort as a civilian employee at Fort Monmouth. Dolores loved to tell stories of the hair-raising flights she took to Washington state to join Edwin on leave from service. After the war, Edwin and Dolores relocated to Brigantine, NJ along with their infant daughter. They built for themselves a beautiful home along the bay and a wonderful life in that community. Dolores’ days were filled with art lessons, bird watching, gardening, sailing regattas with Edwin, Girl Scout activities with Valerie, bridge with friends, tropical cruises, and volunteer commitments. She was a charter member of Brigantine Community Presbyterian Church (teaching Sunday school for many years and hosting an annual art show), worked with the PTA, and was a member of the Children’s Seashore House Auxiliary and the Atlantic City Navy League. Dolores and Edwin became long-time members of the Brigantine Yacht Club. For many years, Dolores also served as a hostess for the Miss America Pageant. In later life, Edwin and Dolores moved to Egg Harbor Township where Dolores became a member of the Offshore Garden Club. Dolores lost Edwin after 47 years together, but she continued to stay active until the onset of illness which brought her under the care of the kind staff at Spring Village. It is there that she spent her final days. Dolores is predeceased by her husband, Edwin, and her brother, John Dudash. She is survived by her daughter, Valerie Armstrong (John); her grandson, Robert Armstrong (Abbi); her sister-in-law, Elaine Dudash; brother-in-law, Walter Hance; sister-in-law, Jean Scholl; cousin, Rita Meyer; many nieces and nephews, and her beloved cat, Graycie. A visitation will be held at Ocean Heights Presbyterian Church, 2116 Ocean Heights Avenue, Egg Harbor Township, NJ on Wednesday, November 30, 2016 from 9:30 to 11:00 a.m. A memorial service will be conducted immediately thereafter at the Church. Burial will then follow at Laurel Memorial Park, Egg Harbor Township, NJ. Arrangements have been entrusted to Wimberg Funeral Home, 211 E. Great Creek Rd, Galloway(609-641-0001). For directions or condolences, please visit wimbergfuneralhome.com. In lieu of flowers, contributions may be made in Dolores’ name to Ocean Heights Presbyterian Church or to a charity of your choice.

The family of Dolores D Hance created this Life Tributes page to make it easy to share your memories.

Send flowers to the Hance family.