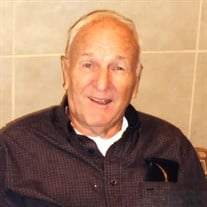 de Kluyver, Dirk, 84 of Galloway, New Jersey, passed away Sunday, May 31, 2020. Dirk was born in Pleasantville to the late Louise and Dirk de Kluyver. After graduating from Pleasantville High School in 1953, Dirk became a union bricklayer. He then enlisted in the US Army and spent more than eighteen months in post-war Germany. Dirk worked at New Jersey Bell Telephone Company and later became a manager for AT&T. He retired after thirty years, never missing a day’s work, and became a member of Telecom Pioneers. Dirk served as a trustee of the City of Absecon Free Library for 20 years for which he helped implement new technology. He also volunteered his time as a tax preparer for AARP. Dirk lived in Absecon for 50 years with his loving wife of 61 years, Virginia (Micki) in the home he built. He always enjoyed Thursday “bowling” night at Oyster Creek Inn and having coffee with the McDonald’s Guys. He was an avid reader, beach goer, cycler and traveler. He was a true friend who was always ready to help others. Above all he loved his family. He is survived by his beloved wife Micki; his wonderful children, Donna (Tim) North, Lori (Jeff) Ranck, and Dirk (Britta) de Kluyver; his grandchildren, Andrew (Mary Cait) North, Kevin North (Adrienne), Kyle North (Nicole), Kylie Ranck, Allison Ranck, Willem de Kluyver, Isabella de Kluyver; great granddaughter, Winona North; along with sisters in law, Patricia Henchy and Phyllis Kraly and many nieces and nephews. He is predeceased by his sisters, Angela (Merle) Steelman and Louise (William) Kuppel. Until we meet again. You were the “best”. Special thank you to the staff at Seacrest Village who took great care of him. A celebration of life will be held at a later date. In lieu of flowers, donations may be sent to Parkinson’s Disease Foundation, Inc. 1359 Broadway Suite 1509 New York, NY 10018 or to a charity of your choice. Arrangements have been entrusted to Wimberg Funeral Home in Galloway, NJ 609-641-0001. For condolences, please visit wimbergfuneralhome.com.

de Kluyver, Dirk, 84 of Galloway, New Jersey, passed away Sunday, May 31, 2020. Dirk was born in Pleasantville to the late Louise and Dirk de Kluyver. After graduating from Pleasantville High School in 1953, Dirk became a union bricklayer.... View Obituary & Service Information

The family of Dirk de Kluyver created this Life Tributes page to make it easy to share your memories.