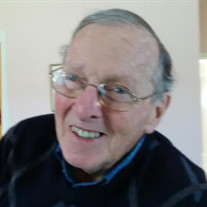 Dieter F. Ehlermann, 87, of Egg Harbor Township, N.J. passed away at home with his family and devoted dog, Bella by his side on Febuary 20, 2018. Dieter was born in Hamburg, Germany to Dr. Friedrich Ehlermann, a doctor of gynecology and Lore (Ruppert) Ehlermann, a ranked tennis player. He started playing tennis as a youngster, coached by his mother. In 1948, Dieter graduated with the Abitur at the Christinuem School and started his education in medicine at the University of Wurzburg in Germany. He traveled through Europe playing tennis for the college and once did an exhibition match in Egypt for King Farouk. In 1954 he was a player on the international curcuit and in 1956 he toured with the Eastern Grasscourt Circuit. In 1959, he came to the United States and turned professional. Joined the USPTA, pro 1 rating. He use to play with other pros at the Armory in NYC and once lost to Bobby Riggs on a bet. He was the tennis director at the County Tennis Club in Bronxville, N.Y., the New York Athletic Club, NYC, the Eldorado Shore and Tennis Club in New Rochelle, NY, and the Biltmore Hotel in Palm Beach, Fl. He had his own club of clay courts in Long Island, N.Y. His love of tennis was supreme. He became a US citizen in 1992. Dieter is survived by his loving wife of 46 years, Barbara, his two sons Lee (Joanne), Scott (Marcie, and her daughter Cardin) his grandchildren, Samantha, Ryan, Reece, Rachel, Riley Ehlermann and Adam and Douglas Hanig. He also leaves behind his brother, Peter (Karin) and a sister Karin in Germany. His sons were his pride and joy and he was so proud of them as he was of his grandchildren. He was a kind and caring person with only good words for his friends. His funeral was at the Northfield Baptist Church on February 22nd and his resting place was at Holy Redeemer Cemetery in Mahwah, N.J. He will never be forgotten.

Dieter F. Ehlermann, 87, of Egg Harbor Township, N.J. passed away at home with his family and devoted dog, Bella by his side on Febuary 20, 2018. Dieter was born in Hamburg, Germany to Dr. Friedrich Ehlermann, a doctor of gynecology and Lore... View Obituary & Service Information

The family of Dieter F Ehlermann created this Life Tributes page to make it easy to share your memories.

Send flowers to the Ehlermann family.