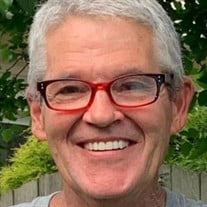 Denny Howard Meighan, Jr., 66, Absecon, NJ, passed away peacefully in Atlanticare Regional Medical Center on March 23 2022 surrounded by his children. Denny was born on November 17 of 1955 in Atlantic City, NJ to Rhoda and Dennis Meighan. He mastered tile setting, but was a jack of all trades at heart. He didn't hesitate to help build a roof (and accidentally fall off with his brother-in-law), or stray from building a go-cart from scrap if the mood struck him. He was a believer in work hard, play harder and was a lover of all things outdoors, especially spending time on his boat (when he wasn't working on it), to go fishing and clamming with his family. He spent much time golfing with family and friends and couldn't help but scream at the TV when his teams weren't doing so well. Denny enjoyed and loved his life and introduced his favorite things early in his children, from teaching them young how to play poker, to taking his sons goose hunting, and getting the middle son stuck in the meadow because he was "big enough" but the shotgun might have been a bit too big and he got kicked back off the crate. And regardless of what it was, clamming with his oldest son, shooting a bow with his youngest, skiing down a mountain with his eldest daughter, or teaching his youngest how to drive at the refuge, he made sure you got it because he wanted you to love the same things and enjoy life as he did. Denny is preceded in death by his mother, Rhoda Ray Martin Meighan, father, Dennis "Sonny" Howard Meighan Sr., and his eldest son, Dennis "Little D" Howard Meighan III. He is survived by his son Teale M. Meighan, his daughters Dawnette "Boo" D. Meighan, Rhoda "Roo" C. Meighan and his son, Tyler "Ty" J. Meighan, including eight grandchildren, four great-grandchildren, as well as Beth Anne Stasuk, Michele Curlott and Penny Meighan, his three loving sisters and many nieces and nephews. From a young age, Denny has always been a man who liked to have fun, from skipping school and ruining his and his sisters christmas by unwrapping and rewrapping gifts, a habit repeated with his own sons or being late (again) for his sister’s wedding because he spontaneously needed to grouse hunt. Throughout his life he always stayed a kid at heart and never allowed his age to stop him in anything he wanted to do. Denny will be especially remembered for his love of music, an avid parrothead and lover of Kenny Chesney. He delighted in singing, dragging you up to do karaoke with him; and dancing, even if it was the same 3 moves. Denny very much followed in his father’s footsteps and was a "silly SOB" who always knew how to lighten the mood and make people laugh, his personality was infectious and wherever he went smiles spread, like getting a group of high schoolers on a bus for a ski trip to sing "Old Hogan's Goat" in unison (a song also heard around a few campfires) or putting on a Rudolf costume and bringing joy to kids at Christmas. Denny Meighan was not a man without his demons, but in spite of that he still made the best of every second he had on this Earth. He was a great friend and a loving brother and father. He often said that he would live forever and if it was going to be anyone, it would have been him. Unfortunately, death is funny in that way and it is unyielding, just like the memories that anyone who has ever met Denny can attest to. He always left an impression and was an unstoppable force right until the end. With every memory created, he will live forever just as he said he would, perhaps not in life, but always in hearts and minds. He will be sorely missed by many, but take solace in knowing he lived his life how he wanted and loved every moment. May his soul finally find rest, cause Lord knows he wasn't sleeping otherwise. Arrangements have been entrusted to Wimberg Funeral Home in Galloway 609-641-0001. For condolences, please visit wimbergfuneralhome.com.

Denny Howard Meighan, Jr., 66, Absecon, NJ, passed away peacefully in Atlanticare Regional Medical Center on March 23 2022 surrounded by his children. Denny was born on November 17 of 1955 in Atlantic City, NJ to Rhoda and Dennis Meighan. He... View Obituary & Service Information

The family of Dennis "Denny" Howard Meighan Jr. created this Life Tributes page to make it easy to share your memories.

Send flowers to the Meighan family.