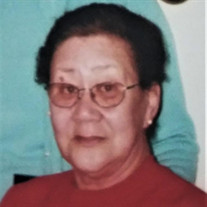 Deborah Lorraine Tate Boust was born on August 12, 1935, to the late Deborah T. and Sherman Tate in the City of Philadelphia, Pa. A graduate from West Philadelphia High School in June, 1953 and also attending Temple University, majoring in Business Administration and Secretarial Science; also, attended Penn State University and completed a course in word processing in April, 1988. Going to work for the School District of Philadelphia in 1955 - as an elementary school secretary - she was later promoted to Confidential Secretary in the Office of the Superintendent of Schools. After 33 years with the School District, she retired and relocated to New Jersey in 1989. She loved to travel and among her favorite places was Aruba, Barbados and Spain; she also loved to travel to Rhode Island for the annual Seafood Fest. She loved her cats, and sadly left “Tommy” behind. Some of her best loved dishes were her sweet potato fluff, sweet potato and lemon pies as well as her macaroni & cheese made with spaghetti noodles, which we will continue as a family tradition. Joining St. Paul C.M.E. Church in South Egg Harbor, New Jersey from 1994 until 2010; and, then became a member of Saint Marys' Episcopal Church, located in Pleasantville, New Jersey. Her only marriage to Robert B. Boust, Jr. brought forth two sons, Robert, III and Stephen. She leaves to mourn her loss, her two sons; daughter-in-law, Janet; her five grandchildren, Stephene, Cymone, Braheem, Leslie and Stephen Jr; her six great grandchildren; her close friend, Cindy Ambrose; her family friend, Anita Wilson; and a host of friends. She will be missed by all who knew her, especially her loving family. A visitation will be held on Saturday, October 10th from 11:00 AM to 12:00 PM with a service at 12:00 PM at Wimberg Funeral Home, 400 Liverpool Ave, Egg Harbor City 609-965-0357. For condolences, please visit wimbergfuneralhome.com. The service will be live on Saturday, October 10th. Please click on the link below by 11:45 am; https://webcast.funeralvue.com/events/viewer/38460

Deborah Lorraine Tate Boust was born on August 12, 1935, to the late Deborah T. and Sherman Tate in the City of Philadelphia, Pa. A graduate from West Philadelphia High School in June, 1953 and also attending Temple University, majoring in... View Obituary & Service Information

The family of Deborah Lorraine Tate Boust created this Life Tributes page to make it easy to share your memories.

Send flowers to the Boust family.