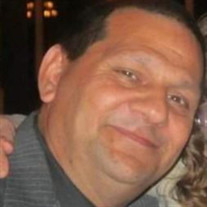 Darryl King Kozenskie Sr. an amazing father, mechanic and put his family before everything, passed away Saturday, May 15, 2021 on his birthday at the young age of 67 years old. He was born in New York during the year 1954 to the late Audrey King Schiro Kozenskie and Robert Kozenskie. Darryl served in the United States Army for a time period. He was survived by his wife, Brenda J. Kozenskie of Egg Harbor City, NJ, who he had been married to for 34 years. Yet even that was not long enough. They got married May 2, 1987 and had an amazing life with their three great children, Darryl King Kozenskie Jr. (Brittanie Kozenskie) (Jr's wife), Larry Thomas Kozenskie and Kristina Arleen Kozenskie. He is also survived by his step son, Michael Dempsey (Karen) of Pine Hill; his one sister, Karen Levin of Cherry Hill; his brother, Timothy Kozenskie of North Carolina; his youngest brother, Keith Kozenskie of Atlantic City; his many grandchildren by the names, Isabella and Joshua (Darryl Jr. and Brittanie's children), Matthew-Robert and Nevaeh Kozenskie, Savannah Kozenskie - Hayes (Kristina's children); along with three step grandsons through Dempsey. He is also survived by his three sisters-in-law, Elaine Stewart of Egg Harbor City, Debbie (Paul Wade) of Egg Harbor Township, and Brieanna Stewart and her son, Giovannia Di Donato of Egg Harbor City; and one brother-in-law, Robert Stewart of Florida. Darryl had many nieces and nephews that he would always share the biggest hugs and smiles with. Their names are Edward Balsam and Lorenzo Kozenskie; Eileen Gensollen (Stewart), two daughters, one son and their father, Giovanni Gensollen; Robert Stewart (Maddie) and his two daughters; Dotti Watson, daughter and son; Tonya Alvarez; Cindy Watson, 4 sons and 1 daughter; Brett Contino and his son; Danielle Wade (CJ) and her one daughter; Brittany Wade (Danny) and her two daughters; and Paulie Wade (Crystal) and his son. He had many acquaintances but two dearest friends by the names of Jaime Moya (Nancy Pagano) and Eugene Moffa. Darryl also had two predeceased in laws who hit his heart strings until the end, Robert Leon Stewart 13th and Dorothy Rose Stewart of Egg Harbor City. He cherished his family and loved his grandchildren more than anything. He would always let it be known that he would do anything in his power to help the ones he loved. Those we love don't go away, they walk beside us every day. "There are three sides to every story, one person's side, the other, and then there's the truth". -Darryl King Kozenskie Sr. Visitation will be held from 6:00pm to 8:00pm on Saturday, May 22, 2021 at Wimberg Funeral Home, 400 Liverpool Ave, Egg Harbor City (609)965-0357, where funeral services will be held at 8:00pm. Condolences and lieu of flowers can be sent to Wimberg Funeral Home (wimbergfuneralhome.com) prior to services or sent to PO BOX 471 Egg Harbor City, NJ 08215 made out to Brenda J. Kozenskie.

Darryl King Kozenskie Sr. an amazing father, mechanic and put his family before everything, passed away Saturday, May 15, 2021 on his birthday at the young age of 67 years old. He was born in New York during the year 1954 to the late Audrey... View Obituary & Service Information

The family of Darryl King Kozenskie Sr. created this Life Tributes page to make it easy to share your memories.

Send flowers to the Kozenskie family.