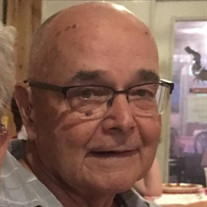 Daniel G Kane, Sr, 88, of Absecon NJ passed away peacefully at home surrounded by his loving family. He was born in Cumberland Maryland on October 27, 1932. Dan attended Pleasantville High School where he met the love of his life, Betty Jane. After graduating in 1951 he became an apprentice plumber with Benjamin E. Labov & Sons until he was drafted into the Army in 1953. He married Betty Jane Somers just before being sent overseas to serve in Berlin, Germany for 18 months. He returned home in 1955 and built their home in Absecon where they have lived for 66 years. Dan worked as a Plumber for Local Union 322 and retired from Kisby Shore Plumbing in 1993. After retiring he then worked as the go-to-guy at Ace Hardware for 23 years. He loved woodworking and he could fix anything. He lived in Absecon all his life where he served the community in many capacities as a Boy Scout Leader, Baseball Coach, member of The Jaycees, Plumbing Inspector, Zoning Official and was a member of the Absecon Library Board for over 40 years. He was a Founding Member of St. Elizabeth Ann Seton Church where he was a member of the Building Committee and could often be seen cutting the grass. He was predeceased by his parents, Thomas and Geneva Kane and sisters, Mary Atack and Rita Williams. His survived by his wife of 68 years, Betty Jane (Somers); his children, Kimberley Krause (Ed), Kathleen Huenke (Rich), Daniel Jr. (Jan), Jeannie Warley (Bob), and Jane Ann Showell (Jim). He is also survived by 12 grandchildren, Diana Delareto (Rocky), Matthew Myrtetus (Julie), Katie Dooner (Gary), Rick Huenke (Liz), Emily Huenke, Jenell Lee (Jeﬀrey Kalani), Douglas Kane (Laura), Jonni Herman, Robert Warley, Jackson Warley, Amanda Pawlowski (Mike) and Joe Showell, as well as 14 great grandchildren with one on the way. He is also survived by his brothers in law, Dick Atack and Ed Williams and many nieces and nephews. A visitation will be held on Sunday, May 23, from 6-8 pm and Monday, May 24, from 11:30-12:30 at the Wimberg Funeral Home in Galloway, followed by a Mass of Christian Burial at Saint Elizabeth Ann Seton Church, at 1 pm, 591 New Jersey Ave, Absecon NJ. In lieu of ﬂowers, please consider a donation in his honor to Saint Elizabeth Ann Seton Church or a Charity of your choice. For condolences or directions, please visit wimbergfuneralhome.com. To view the mass, please use the following link provided for the livestream staring at 12:45pm: https://webcast.funeralvue.com/events/viewer/54523.

Daniel G Kane, Sr, 88, of Absecon NJ passed away peacefully at home surrounded by his loving family. He was born in Cumberland Maryland on October 27, 1932. Dan attended Pleasantville High School where he met the love of his life, Betty Jane.... View Obituary & Service Information

The family of Daniel G Kane Sr. created this Life Tributes page to make it easy to share your memories.

Send flowers to the Kane family.