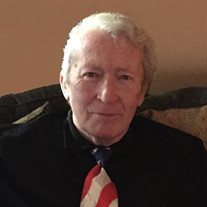 Daniel George “EBBY” Eberwine, 74, of Absecon passed away on May 24, 2018. Dan was predeceased by his parents, Catherine in 1961 and John in 1975. Dan grew up in the Brewerytown section of Philadelphia and attended Bishop Neumann High School before entering the United States Air Force in 1963. Dan served with the Strategic Air Command (SAC) at Blytheville, Arkansas before being deployed to Frankfurt, Germany. He served stateside in Brunswick, ME; Port Hueneme, CA and finally Mather AFB in Sacramento, CA where he retired from the reserves in 1996. Dan attended American River Junior College in Sacramento and received his Associates Degree. He went on to receive his Bachelor of Science in Art from California State University, Sacramento in 1974. He was employed at A.C. Moore as a framer before an illness caused his retirement several years ago. Dan was an avid reader and collector of rare paintings and stamps, in addition to being a very good artist. One of his favorites of all time was the “The Man in the Iron Mask.” Dan is survived by daughters, Heidi Dias (Robert - Redding, CA.) and Cathleen Arnold (David - Nashville, TN); his brothers, John (Monica), Joseph (Judy), and James (Cherie); sisters, Margaret and Frances Holod (Raymond); and his three loving grandchildren, Cassie, Regan and Andrew. Dan had the support of many throughout his life including the mother of his children, Charlene, and his dear friend, Freya. When we all face times of sorrow we look to some of his closest friends from the past for wisdom and consolation. I did, and his friend Tom Perks summed Dan’s life up – “He was one of the smartest people I have ever known”. Graveside service will be held at Dan’s final resting place Atlantic County Veterans Cemetery on Saturday, June 30th at 11:00 am. If you care to make a donation in honor of Daniel Eberwine, please do so to the Veterans Administration of your choice. Arrangements have been entrusted to Wimberg Funeral Home, Egg Harbor City, 609-965-0357. For condolences, please visit wimbergfuneralhome.com.

Daniel George &#8220;EBBY&#8221; Eberwine, 74, of Absecon passed away on May 24, 2018. Dan was predeceased by his parents, Catherine in 1961 and John in 1975. Dan grew up in the Brewerytown section of Philadelphia and attended Bishop Neumann... View Obituary & Service Information

The family of Daniel George "EBBY" Eberwine created this Life Tributes page to make it easy to share your memories.

Daniel George “EBBY” Eberwine, 74, of Absecon passed away on...

Send flowers to the Eberwine family.