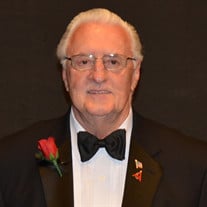 Curtiss “Curt” Covert, 82, of Mays Landing, died Saturday, April 14, at Atlanticare Regional Medical Center, Mainland Campus. Born in Newark, he was raised in Union, N.J. and lived in Edison and Ocean Grove before moving to Mays Landing. He was the son of the late Charles and Madeline (Armand) Covert. Mr. Covert owned and operated Covert’s Typewriter Sales and Service in Elizabeth, N.J. for many years. He was a member of the Rotary Club of Elizabeth and American Federation of Musicians Locals 373, 204, and 151. Mr. Covert was a lifelong trombone player and was an originator of The Music Makers, a big band in Northern New Jersey. He was also a member of the Imperial Symphonic Band of South River, the Ocean Grove Wind Ensemble, Orchestra of St. Peter-by-the Sea and, most recently, a member of the South Jersey Area Wind Ensemble. Surviving are his wife Joyce; his son Scott Covert of Ridgway, PA; stepsons, Stephen Krupa (Margarite) of Weehawken and Scott Krupa (Laura) of Pittstown; sister Gail Gaiser; granddaughters Kelly Krupa of Pittstown, Jessie Busch of Ridgway, PA, Terrie Covert of Ridgway PA, and a great-granddaughter, Haley and niece Laura Richardson. Visitation is planned at Church of St. Mark & All Saints Episcopal Church Pitney Road, Galloway Township on Saturday, April 21st from 10:00 to 11:00 AM followed by Mass starting at 11:00 AM. In lieu of flowers, donations may be made to St. Mark and All Saints Church. Arrangements by Wimberg Funeral Home in Galloway Township 609-641-0001.

The family of Curtiss "Curt" C. Covert created this Life Tributes page to make it easy to share your memories.

Send flowers to the Covert family.