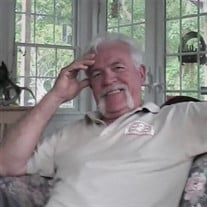 Gaupp, Christian Donald “Don” 80 of Germania, Galloway Twp. Passed away peacefully surrounded by family on Monday, October 25, 2021, after a courageous battle with cancer. Born at home in Germania on March 19, 1941 to Christian and Clare Gaupp (Ade). He attended Cologne Avenue School, Egg Harbor City High School, and NJ College of Commerce. Don met Nancy (nee Wilson) married and started his career at Atlantic Electric working from 1960 to 1999. After retiring, he returned to Atlantic Electric as a consultant for 3 years. After his years in the utility industry, he worked parttime at Wimberg Funeral Home in EHC where he enjoyed providing comfort to families along with the entire Wimberg team. Don was Superintendent/President of Germania Cemetery Association for 15 years. He was a member of Germania Gun Club for 43 years and President for 30 years. He was a member of Pine Valley Rod & Gun Club for 18 years. Don was also a member and past President of the Atlantic County Federation of Sportsmen’s Clubs. He loved hunting, fishing, trapping, traveling across country multiple times, his second home/cabin in Maine, and gardening. Don also liked his many “toys”; tractors, trucks, motorcycles, boats, ATV/UTV’s and campers. He was predeceased by his parents. Don is survived by his devoted wife of 62 years, Nancy (nee Wilson); his son, Christian Eric (Carol) Gaupp; his daughter, Lori Dunleavy; his four granddaughters, Ashlee Laielli (Mike Jr.), April Gaupp (Michael Griesemer “Fiance”), Mikaela (David Camp), and Sidney Dunleavy and their father, Michael Dunleavy; his two great grandchildren, Roman M. & Iris V. Laielli. He is also survived by his cousin, Clare Schroer who was more like a sister to him along with her daughter, Barbara (Maatje) who were his “private nurses”, along with many cousins and friends; and his sister and brother-n-law, Sharon and Bob Wilson and nieces and nephew, Melissa and Wayne Wilson. A special thanks to his care givers from Angelic Health Hospice Care. It is with deep sadness, we say “see you later” to our husband, father, grandfather, great grandfather, and friend. Don never said “good-bye”. Visitation will be on Monday, November 1st starting at 11:00 am followed by a service at 1:00 pm at Wimberg Funeral Home 211 E. Great Creek Rd. Galloway, 609-641-0001. Interment will follow at Germania Cemetery in Galloway. For directions or condolences, please visit wimbergfuneralhome.com. In lieu of flowers, donations may be made to St. Jude Children’s Hospital or Shriners Hospitals. Please join us live at 12:45 PM on 11/1 for the service; https://webcast.funeralvue.com/events/viewer/62897

Gaupp, Christian Donald &#8220;Don&#8221; 80 of Germania, Galloway Twp. Passed away peacefully surrounded by family on Monday, October 25, 2021, after a courageous battle with cancer. Born at home in Germania on March 19, 1941 to Christian and... View Obituary & Service Information

Send flowers to the Gaupp family.