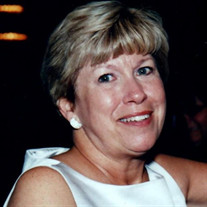 Cheryl Rusiecki of Egg Harbor Twp. was born in Detroit, Michigan on December 21, 1946. She was raised by her adoptive parents Robert and Genevieve Franta in Detroit. Cheryl was a 1964 graduate of Denby H.S. For most of her adult life she worked as a legal secretary. Cheryl left Detroit in September 1972 to work for Rogers and Wells, a prestigious law firm headquartered at the Pan Am building in New York City. Within two weeks of her arrival, she met her future husband Larry at a Manhattan night spot. They were wed on August 17, 1974 at Trinity Lutheran Church in Detroit. Cheryl and Larry purchased a home in Lakewood, NJ in 1975. Ten years later, they would trade up to a somewhat larger home in Manchester, NJ. They would finally purchase their retirement home in Egg Harbor Township in 2003. Cheryl was a lifelong practicing Lutheran. She was one of the original members of Redeemer Lutheran Church in Manchester, NJ where she sang in the choir. In Atlantic County, she would later sing in the choir at Grace Lutheran Church. At the time of her passing, she was a member of Peace Lutheran Church in Galloway, NJ. Cheryl became the mother of Amy E. Rusiecki (now Graczyk) in 1977 and Robert L. Rusiecki in 1979. She is the grandmother of Tyler and Kaila Graczyk. Cheryl's adoptive parents never revealed who her biological family were and she became interested in finding out about them. Through a DNA search, she learned she had a brother and extended family who were living in Ohio and Michigan. Cheryl was able to meet them for the first time only a few years ago. Cheryl discovered that her father had been a coal miner from Ohio who had married an English girl in Britain while he was stationed there during WW2. The marriage didn't last long after the war, and she was adopted by relatives of her mother in Michigan. Cheryl's DNA research also revealed that her biological father's ancestry could be traced back to an officer who had served in the Virginia militia during the Revolutionary War. In this way, she was able to apply for and gain admission to the Daughters’ of the American Revolution (DAR). In the process, she learned that her ancestors had also served in the War of 1812 as well as the Civil War (on both sides). Cheryl passed away on the evening of October 25. 2021 from complications arising from cancer. She is survived by her husband, Larry; her daughter, Amy; her son-in-law, Dan; her grandchildren, Tyler and Kaila Graczyk; and by her son, Robert Rusiecki. A gathering for Cheryl will be held on Monday, November 8th from 10am to 11am with a memorial service at 11am at Wimberg Funeral Home in Galloway, 609-641-0001. For condolences or directions, please visit wimbergfuneralhome.com.

Cheryl Rusiecki of Egg Harbor Twp. was born in Detroit, Michigan on December 21, 1946. She was raised by her adoptive parents Robert and Genevieve Franta in Detroit. Cheryl was a 1964 graduate of Denby H.S. For most of her adult life she... View Obituary & Service Information

The family of Cheryl Rusiecki created this Life Tributes page to make it easy to share your memories.

Send flowers to the Rusiecki family.