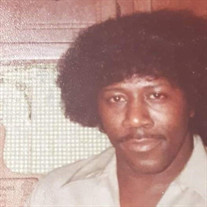 Charles Scott, 71 of Egg Harbor City passed away on Tuesday, August 25, 2020 at AtlantiCare in Galloway, NJ. He was born in Chicago, IL at Cook County Hospital on February 9, 1949. Charles started singing in the late 1960’s thanks to his brother, Michael, who helped him with his singing career. . Charles was a vocalist with Bill Brown, Christopher Allen (aka Chris Bernard), and Earle Roberts with Shades of Brown. Shades of Brown began as the Fortrells, changing their name to the Mentors during their contract with ABC records. They became Shades of Brown when they signed to Chess Records – Cadet Records. Shades of Brown had a final single before calling it quits, “How could you love him”. After that Charles, moved to Egg Harbor City. He worked for Egg Harbor Boatworks, then Absecon Mills as a Machinist. Charles also know as “Short House”, loved to sing and dance! He was a very well-dressed man and when you walked in his house you could eat off the floor. People always said he cleaned better than any woman! He loved his family more than anything else. He is predeceased by his father McKinley Scott; his siblings, Tommy Scott, Tyrone Scott, Krista Scott, Leola Johnson, and Aunt Cookie; and his grandchildren, Ashiyah Jackson and Zyree Jackson. Charles is survived by his children, Sandra Thompson of Millville, NJ, Darren Cates of Egg Harbor City, NJ, Terron Clay of Chicago, IL, Shoshania Peterson of Minnesota, Meshell Scott of Las Vegas, NV, Regina DeJesus of Boston, MA, Valerie Vargas (Eddie) of Florida, Erica Rivera (Reinaldo) Worcester, MA, Ashaday Estrada of Worcester, MA, and Nate Hurt of Philadelphia, PA; his 33 grandchildren; his 14 great grandchildren; his mother, Floy Scott of Egg Harbor City; his siblings, Margaret Beaver (Charles) of Voorhees, Lynetta McKenney of Hammonton, Michael Scott, Delbert Scott, and Terry Scott all of Egg Harbor City; and many nieces, nephews and friends. He will be missed by all who has the pleasure to know him. A visitation will be held on Saturday, September 5th from 10:00 to 11:00 AM with a service at 11:00 AM all at Wimberg Funeral Home, 400 Liverpool Ave, Egg Harbor City, 609-965-0357. Interment will immediately follow at Egg Harbor City Cemetery. For condolences or directions, please visit wimbergfuneralhome.com. Charles Scott's service will be streamed live. Please go to the vidoe's section and click link or use this link https://webcast.funeralvue.com/events/viewer/36372 to log in at 10:50 AM for the 11:00 AM service.

Charles Scott, 71 of Egg Harbor City passed away on Tuesday, August 25, 2020 at AtlantiCare in Galloway, NJ. He was born in Chicago, IL at Cook County Hospital on February 9, 1949. Charles started singing in the late 1960&#8217;s thanks... View Obituary & Service Information

The family of Charles Scott created this Life Tributes page to make it easy to share your memories.

Charles Scott, 71 of Egg Harbor City passed away on Tuesday,...

Send flowers to the Scott family.