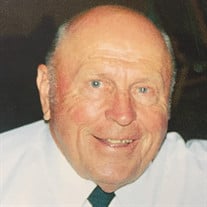 Roesch, Charles H., - 91, of Cologne, passed away peacefully at home surrounded by his family on June 8, 2017. Charlie was born in Cologne on September 24, 1925, and lived there his entire life. He was predeceased by his father, Charles; mother, Alice; brother, Arthur; and sister, Dorothy. Charlie was an insurance agent for Prudential Insurance Company for 33 years, retiring in 1990. He was active in the Atlantic County Life Underwriters Association and served a term as president. He was awarded numerous Prudential and industry sales awards. In 1974, he was chairman of the Galloway Township Charter Study Commission which recommended the change to the present-day council-manager form of government. He was president of the Galloway Township Chamber of Commerce. He was a parishioner of Our Lady of Perpetual Help parish (Assumption), and a member of the Knights of Columbus, the Germania Gunning Club and the NRA. He played 8 years of baseball for the Cologne Blue Sox of the Atlantic County Baseball League. He was a big Philadelphia Phillies fan, and enjoyed going to games with his family. Charlie and his wife, Rose, traveled around the United States, but he especially loved his winters in Florida. Charlie enjoyed his grandchildren, travel, hunting, fishing, reading, playing cards, video poker, and at the age of 69 started golfing. He proudly displayed his collection of over 800 logo golf balls. Charlie played “Hozie” every Friday night at the Bob White Bar and Mickey & Minnie’s, and also looked forward to breakfast with his fellow Prudential retirees. He is survived by his loving wife of 67 years, Rose (Schiavo); his 4 children, Carol Lombardi (Michael) of Bloomfield Hills, MI, Barbara Sweeney (Michael) of East Lyme, CT, Janet Wilkinson (John Black) of Egg Harbor Township, and Thomas (Karen) of Galloway; sister, Alice Johnson of Cologne, sister-in-law Dolores Roesch of Cologne, and brothers-in-law Frank Schiavo of Sarasota, FL and Ralph Schiavo of Ocean City, NJ. He is also survived by his 8 beautiful grandchildren: Matthew, Kevin and Lisa Lombardi, Erik, Bryan and Jesse Sweeney, and Andrew & Rebecca Roesch, as well as many nieces and nephews. He was a wonderful “Pop Pop” to his grandchildren who was proud of all of their accomplishments, and could be heard at their sporting events cheering them on with a “Ra Ra Roesch!” A viewing will be held on Monday, June 12th from 6:00 to 8:00 PM and again on Tuesday, June 13th from 9:00 to 10:30 AM at Wimberg Funeral Home, 211 East Great Creek Road, Galloway, NJ. A Mass of Christian Burial will be held on Tuesday, June 13th at 11:00 AM at Our Lady of Perpetual Help Parish, Church of the Assumption, 146 S. Pitney Road, Galloway, NJ. Entombment will immediately follow at Holy Cross Cemetery, 5061 Harding Highway, Mays Landing, NJ. For directions or condolences, please visit wimbergfuneralhome.com.

Roesch, Charles H., - 91, of Cologne, passed away peacefully at home surrounded by his family on June 8, 2017. Charlie was born in Cologne on September 24, 1925, and lived there his entire life. He was predeceased by his father, Charles; mother,... View Obituary & Service Information

The family of Charles H Roesch created this Life Tributes page to make it easy to share your memories.

Send flowers to the Roesch family.