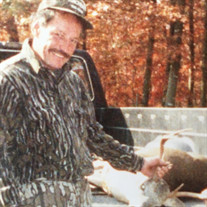 Charles (Denny) Fox, Jr., 67, of Galloway passed away peacefully with his family by his side on Tuesday, March 14 2017. Born in Philadelphia, PA to Angelina and Charles Fox on January 17 1950. His mother later moved the family to the Inlet in Atlantic City, where he spent his youth. He attended Holy Spirit High School when it was still in Atlantic City. He enlisted in the United States Navy, where he got to see the world. Later, he attended the Police Academy and became an Atlantic City police officer where he spent 27 years as a Patrolman. He loved being a street cop and serving his community. After retirement, he spent most of his time in the great outdoors hunting and fishing. He was an avid hunter and fisherman. He is survived by his wife of 32 years, Sandy (Hawn); his sons, Dennis and Jerry; his brother, Jerry Giangiobbe; sister, Mary Adams; a host of nieces and nephews, brother and sister in laws that he loved dearly; and many dear friends that continued to call and visit until the very end. He loved sharing good old day’s stories with them. He is also survived by the first Mrs. Fox, Claire Fox-Subin, the mother of his beloved son, Billy. They remained close friends and were able to combine families beautifully. He is preceded in death by his parents, Angelina and Charles; his brother, Jimmy; his son, Billy and daughter, Danielle. Services will be private as Denny wanted. In lieu of flowers, the family would like contributions to be made to the Children's Hospital of Philadelphia or the charity of your choice. Arrangements have been entrusted to Wimberg Funeral Home, 211 E. Great Creek Rd, Galloway 609-641-0001. For condolences, please visit wimbergfuneralhome.com.

Charles (Denny) Fox, Jr., 67, of Galloway passed away peacefully with his family by his side on Tuesday, March 14 2017. Born in Philadelphia, PA to Angelina and Charles Fox on January 17 1950. His mother later moved the family to the Inlet in... View Obituary & Service Information

The family of Charles "Denny" Fox Jr. created this Life Tributes page to make it easy to share your memories.

Send flowers to the Fox family.