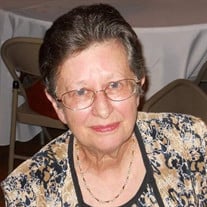 Butterhof, Catherine, “Cassie” 82 of Mays Landing, passed away on February 3, 2020 peacefully at her home with family members at her side, after a long, courageous battle with cancer. She was born in Montgomery County, Pennsylvania on January 17, 1938. She lived in South Jersey for most of her life. She attended Egg Harbor City High School. She was employed by Hoenes Bus Company, Douglas Industries and Atlantic City Medical Center. In her younger years, she was a member of the St. Nicholas All Girl Drum and Bugle Corps where she met dear friends she had for her lifetime. During her retirement years, she had a passion for woodworking, selling her creations at craft shows. She spent many summers in Montana with her son, Joe. She enjoyed the beauty and culture of the state. She enjoyed the solitude of fishing. She enjoyed spending time with the loves of her life, her grandchildren and great-grandchildren, affectionately known as “gram-gram’ to her great grandchildren. She was a strong woman overcoming many difficult medical illnesses and surgeries. She is predeceased by her father, Elmer Kline; mother, Catherine Hanselmann; husband, Joseph Butterhof; her grandson, Kyle Butterhof; brother, Joseph Kline; and special companion, James Conway. Cassie will be sadly missed by her many family and friends. She is survived by her children, Donna Reese, Dawn Mathis (Rusty), Joseph Butterhof (Charlie), Gene Reese; grandchildren, Neil Woerner (Yasmin), Brian Woerner (Stacie), Lindsey Woerner (Robb), James Butterhof and Russell Mathis; great grandchildren, Jayliana, Cash, Cooper, Riley- Mae, Bobby and Jenelle; sister, Joan Dupper; sister in-laws, Joann Norton and Jane Huebner; as well as many nieces and nephews. Be with Kyle and tell him we love him and miss him! Family and friends are invited to attend a celebration of her life on Saturday, February 15 from 10:00 -12:00at Wimberg Funeral Home, 400 Liverpool Avenue, Egg Harbor City, 609-965-0357. For condolences or directions, please visit wimbergfuneralhome.com. Memorial contributions may be made to Ronald McDonald House Southern New Jersey, 550 Mickle Blvd, Camden, NJ 08103.

Butterhof, Catherine, &#8220;Cassie&#8221; 82 of Mays Landing, passed away on February 3, 2020 peacefully at her home with family members at her side, after a long, courageous battle with cancer. She was born in Montgomery County, Pennsylvania... View Obituary & Service Information

The family of Catherine Butterhof created this Life Tributes page to make it easy to share your memories.