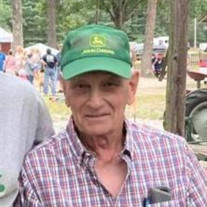 Carl Rotellini passed away October 4, 2021 at Cooper Medical Center after a short illness. Born May 25, 1937 in Egg Harbor City to David and Lillian Rotellini. Carl was a lifelong resident of Egg Harbor City and Galloway Township. Carl worked for the family business, The Laureate Press. After many years Carl worked at the Vineyard Machine Shop. Carl then opened his own small engine shop. After his retirement he spent 10 years traveling with his wife, Marie (Ramp) who predeceased him in March of 2009. Carl had many interests including; restoring antique engines and tractors with grandson, Dan, attending steam shows, gardening and fishing. He was an avid train enthusiast. Carl spent many summers in Sweetwater cruising the Mullica in his ski boat that he built. Besides wife Marie, Carl was predeceased by his brothers, Ferdinand, David, and Edward; his son-in-law, Marty Lampe, and special friend, Evonne Kaminski. Carl leaves behind his daughters, Susan Walker-Lampe, Judy Sumser (Frank), and Carla Rotellini; his grandchildren, Daniel Toler (Lauren), Julie Sumser, Sara Walker, and Emily Walker; his great grandchildren, Jakob Toler, Haley Toler, and Zach Toler; his sisters, Adele McMahon and Joy Dempsey (John); his brother-in-law, Billy Rampe (Susan); his special nephews, Thomas Rotellini, Mike McMahon; and son-in-law, Bobby Walker. Carl had many wonderful friends, The Merkord Garage Gang, Clifford Mosier, Jay Schabb, Jim Smith and Bill & Ann Fox. A gathering will be held on Saturday, October 30, 2021 from 9am until 10am at the Wimberg Funeral Home 400 Liverpool Avenue, Egg Harbor City. A Service will follow at 10am. Prayers will be said at the Germania Cemetery at the graveside. Condolences may be left for the family at wimbergfuneralhome.com.

The family of Carl Rotellini created this Life Tributes page to make it easy to share your memories.

Send flowers to the Rotellini family.