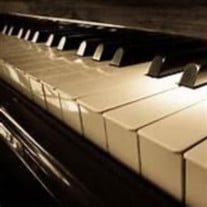 Noble, Bud of Galloway, passed away on December 7, 2020. He was born in Jersey City, NJ and began his life of music at the age of five. In his early teens, he became the recipient of a Junior Scholarship to the Juilliard School to study under the guidance of renowned Madame Rosina Lhévinne and in later years, would become a protégé of Maestro Emmanuel Bay leading to a guest soloist appearance with the Hollywood Bowl Symphony Orchestra. His strict regimen of classical training was to be colored by a more contemporary and interpretive music style under his mentor, orchestra leader and composer, Ray Nobel. In the late fifties, following his first year of college and under Ray’s sponsorship, he was invited to further is music education as an intern in the MGM music department in Hollywood. Soon, thereafter, he would enter into a full-term contract and have the opportunity to work and study with famous film composers such as; Russell Garcia, Bronislau Kaper, Andre Previn, Johnny Green and the legendary, Roger Edens. During his MGM tenure, he also appeared with the Mort Lindsey Orchestra and became the accompanist for Judy Garland. In the late fifties, Noble formed a trio and appeared at the more noteworthy cabarets and show bars on the Sunset Strip which, at that moment in history, were considered sounding boards for aspiring piano artists. With his trio, he also appeared regularly at the Tropicana Hotel and Casino Showcase Lounge in Las Vegas, sharing the stage with many legendary performers. Returning to the east coast in the sixties, he performed with his new trio in Manhattan and North Jersey while completing his education and becoming a 1966 graduate of Seton Hall University. Nobel toured nationally with his trio during the seventies eventually returning to the east at Grossinger’s Catskill Resort and the famous jimmy Weston’s Supper Club in Manhattan. With the advent of casino gaming, Noble was contracted to appear at Harrah’s in Atlantic City. This engagement would last nine years; including two years as a soloist at the fashionable Ivana’s Restaurant when Trump Plaza was initially affiliated with Harrah’s. He would later be featured at the Ritz Carlton, Philadelphia. The Sands Hotel and Casino’s Copa Lounge and most recently the Mount Airy Casino in the Poconos. Noble has also authored and composed a musical play entitled, “Ahab A Musical Odyssey” which is currently in the early stages of production. Noble entered the academic world at the invitation of Drexel University, formulating a class in Intellectual Property Studies as applied to the music industry. He would later offer that program to Stockton University, where he taught as an adjunct faculty instructor. In 2015, Noble was honored by an invitation to compose the music for Stockton University’s new Alma Mater which he entitled, “Ospreys on Parade.” He is survived by his loving partner of 32 years, Emily Guarriello; his nieces, Carol Schlitt, Maggie Schutzman and Trish James; his nephew, Ronald Schlitt; his sister-in-law, Mary Schlitt, his loving puppy, Tucker; and many, many friends. Services will be at a later date. Arrangements have been entrusted to Wimberg Funeral Home in Galloway 609-641-0001. For condolences, please visit wimbergfuneralhome.com.

Noble, Bud of Galloway, passed away on December 7, 2020. He was born in Jersey City, NJ and began his life of music at the age of five. In his early teens, he became the recipient of a Junior Scholarship to the Juilliard School to study under... View Obituary & Service Information

The family of Bud Noble created this Life Tributes page to make it easy to share your memories.

Send flowers to the Noble family.