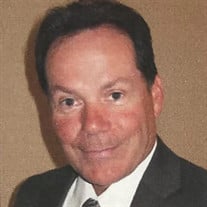 Brian Kirchner, M.D AKA “Doc”, 64, of Absecon passed away on February 6, 2021, peacefully and with his family at home after an eight-month battle with cancer. Brian was born in Wheeling West Virginia in 1956, he lived in Arizona before moving to Egg Harbor City when he was 11. He was a graduate of Oakcrest High School, Atlantic Community College, Stockton College and the University of Medicine and Dentistry where he received his medical degree in 1987. He went on to Cooper University Hospital where he did his residency in Internal medicine. After completing his residency, he opened his private practice in 1990 on Church Street in Absecon. In 2001, with his wife, Absecon Medical was formed and he employed three physicians and 11 ancillary staff. In 2014, he joined AtlantiCare Physicians group and worked there until July 2020. Brian was a renaissance man. His hobbies and interests were varied and passionate. He was a boater, a hunter, a fisherman, a trumpet player and a collector. He was an avid remote control airplane enthusiast. Brian built over 60 planes and spent many joyful hours flying them and his drone. In 2018, he took his first solo flight as a student pilot with Big Sky Aviation and was able to fly just three weeks ago. He earned his 4th degree Black Belt from Ninja Karate Academy from 1980 to 2014. He loved to travel with Carol, his children, grandchildren and friends. His travel was extensive from Florida to Istanbul, Turkey and every place in between. He is survived by his wife, Carol Jo (Brown); his children, son, Michael Philippou and Tanya Philippou and his daughter, Nicole Applegate and Patrick Applegate; his five grandchildren, Brianna, Sophia, Mia, Josephine and Grace, to them he was the most intelligent man in the world; and his two Cavalier fur babies, Mick and Remi, will miss their daddy and his many treats. As well as his devoted sister, Victoria Ramp and brother-in-law, George Ramp; his brothers, Eric and Kurt Kirchner; his nieces, Jennifer Day and Crystal Kirchner; his great nephew, Stevie Day; and his brother-in-law, James F. Brown. Special thanks are given to devoted caring friends, neighbors, and loyal co-worker, Terry Lindenmuth, who worked along side him for 29 years! Also, to his medical team especially Dr. Naim Nazha, Dr. John Kasper and Compassionate Care Hospice. He is predeceased by his father, Robert Keith Kirchner; his mother, Geraldine Kirchner; and his niece, Candace Kirchner. He also leaves many loyal patients who had trusted their health in his hands over many years of practice and he was thankful for their love and friendship. A visitation will be held on Saturday, February 13th from 9:00 to 11:30 AM with the service beginning at 11:30 AM at Wimberg Funeral Home, 211 E. Great Creek Rd., Galloway, 609-641-0001. Interment will immediately follow at Holy Cross Cemetery, 5061 Harding Hwy, Mays Landing, NJ. For condolences, directions, and the link for the live stream, please visit wimbergfuneralhome.com. In lieu of flowers, we suggest donations to the Community Foodbank of New Jersey. Please join us live on Saturday, February 13th for the service by 11:15 AM at this link; https://webcast.funeralvue.com/events/viewer/47866

Brian Kirchner, M.D AKA &#8220;Doc&#8221;, 64, of Absecon passed away on February 6, 2021, peacefully and with his family at home after an eight-month battle with cancer. Brian was born in Wheeling West Virginia in 1956, he lived in Arizona... View Obituary & Service Information

The family of Brian "Doc" Kirchner M.D. created this Life Tributes page to make it easy to share your memories.

Send flowers to the Kirchner family.