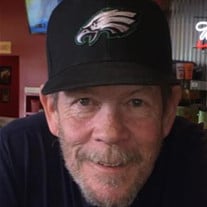 Bill Hogan (William Jr. aka Billy, sheet metal guru, mentor of Hoganomics), A tribute. Born 01-01-1956 (everyone celebrated his birthday), passed 03-16-2019 (everyone can celebrate his life in Irish fashion). Bill was born to William and Marie Hogan, their first born. He resided in many places throughout the country, which gave him that unusual accent and the ability to make many good friends. If you were once his friend, you were always his friend. You may not have heard from or seen him as much as you would have liked, but he loved you all the same as if he had just seen you....to know him was to love him! Bill was a simple man with simple pleasures. He’d be surprised that his wife Shirley (of 35 years) would write such a lengthy obituary for him! He believed in hard work, well done for a fair price. He was a master of sheet metal fabrication, and would never overcharge for a fitting. He was so proud to start his own business as Hogan’s Heat & Air (after having worked for United Heating and Wagner Refrigeration). Bill was able to install his great work into many businesses and homes. You may be the proud owner of some of his “artwork” in your home. Much of that work was accomplished while he listened to his favorite music, primarily “The Boss” Bruce Springsteen. Bill had many things that made him happy. He was so proud that he was able to build his log home in the woods, and was quite happy with the Eagles winning the Super Bowl (and being able to see the trophy up close), but Bill’s greatest pride and joy were his two girls, Amanda Haviland and Lindsey Borkowski. They have given us the two best sons-in-law, John Borkowski and Darren Haviland. Pop so loved his sons-in-laws! And then he was blessed with four awesome grandchildren - John 5, Emmy 4, Bennett 2 and Zoey 1. Also, at the top of the list of his loves were his dad (they’re together again), his mom, Marie (Florida). The recipients of his childhood teasing and Bruce concert partners, his dear “sista”Patty (Florida) and brother Bryan (wife Laurie, nephew William and niece Lizzy), in North Carolina. Bill loved his aunts, uncles and cousins spread throughout the east coast. It’s the Hogan/Moore strength and sense of humor that gets us through the difficult times. Bill had some good times with his brother-in-law David Gruber (Norma) and nephew Jeremy. He loved his sister-in-law Suzanne Bell (John) and the whole crew in Maryland. Thank you Suzanne for being such a source of strength, especially in Bill’s last week. Also loved, were Bill’s coworkers at Conn Mechanical systems. • In memory of Bill, don’t let the “Glory Days” pass you by. Enjoy the crazy times when children are little, a cold beer (at a reasonable price), some good music, watch a great game. Bill’s choices were the Eagles, Phillies ( they’re looking great), NASCAR the #9 car (whoever was in it) and playoff games. Please help us celebrate Bill’s life with some of your favorite stories. Bill’s life celebration will take place at his daughter Lindsey’s house. For details of the specifics please email Shirley, at [email protected]

Bill Hogan (William Jr. aka Billy, sheet metal guru, mentor of Hoganomics), A tribute. Born 01-01-1956 (everyone celebrated his birthday), passed 03-16-2019 (everyone can celebrate his life in Irish fashion). Bill was born to William and Marie... View Obituary & Service Information

The family of Bill Hogan created this Life Tributes page to make it easy to share your memories.

Send flowers to the Hogan family.