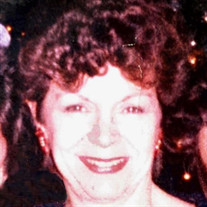 Betty departed this earth unexpectedly, to join her family and closest friends in eternal rest. She passed away in Atlantic City, fittingly, where she was born, raised, and married. She loved the old Atlantic City, and was filled with colorful stories of her childhood, and her three brothers, growing up during The Great Depression. Unencumbered by parental guidance, the four Arlia children lived on the beach, swam all day, and spent many an hour sneaking into the Steel Pier or a movie house. She made many lifelong friends in the city. After marrying, she eventually settled in Absecon, where she raised her three children. She spent several decades in Absecon and belonged to many clubs, where she made even more lasting friendships. Betty was well known for her outgoing and expansive nature. She could be alone with a stranger, and in five minutes she would know their name, where they lived, how many children they had, where they worked, etc. and she’d remember those details forever. In her early years she worked as a switchboard operator all over Atlantic County, but most notably The Atlantic City Race Course, Stockton College, and the early Resorts International. Many may remember her from twenty-five plus years in the real estate business. Betty loved the Lord, her family, and anything that had to do with the shore. She spent countless hours on Brigantine beach with her friends or family until she could no longer do so. A perfect day to her was a day at the beach, or on a boat, with a seafood dinner to end the day. Leaving to cherish her memory are her daughter Susan Leopardi, son James (Doreen) Leopardi, son Lee (Ashley Baldwin) Leopardi, beloved grandchildren, April, Caroline, Rachel, Audra, and Lee Jr., great-grandchildren Alyssa, Trek, Morgan, Tiana and Jada, plus numerous nieces and nephews. Preceded in death by her mother Blanche Bozarth Arlia, and father Domenic Arlia, brothers and their wives, Charles(Lorena), Joseph(Rene), and William (Gertrude) Arlia. A Visitation will be held on Friday, March 26, 2021 from 10am until 11am at the Wimberg Funeral Home 400 Liverpool Avenue, Egg Harbor City, NJ 08215. A Service will be held at 11am at the funeral home. Burial will follow at Laurel Memorial Park. In lieu of flowers Betty requests a donation to any nonprofit organization with a worthy cause. Her personal preference St.Jude’s Hospital for Children.

Betty departed this earth unexpectedly, to join her family and closest friends in eternal rest. She passed away in Atlantic City, fittingly, where she was born, raised, and married. She loved the old Atlantic City, and was filled with colorful... View Obituary & Service Information

The family of Betty Arlia Leopardi Conti created this Life Tributes page to make it easy to share your memories.

Betty departed this earth unexpectedly, to join her family and...