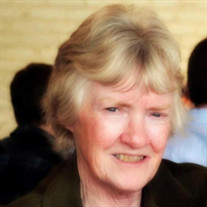 Barbara L. McLaughlin- 78, of Galloway, NJ, passed away at home surrounded by her family on Wednesday, September 8, 2021, after a characteristically resolute, some might say stubborn, battle with long-standing health challenges. Born January... View Obituary & Service Information

Please join us live on Saturday 9/18 at 11:45 AM for the livestream of the mass; https://webcast.funeralvue.com/events/viewer/60314

Send flowers to the McLaughlin family.