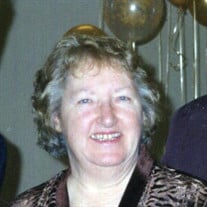 Barbara Anne DeMarco, nee Dressler, 81, of Mullica Township passed quietly into Heaven, surrounded by her family, on Friday, November 11, 2016. Barbara will be remembered as one of the most kind and caring people this world has known. She greeted everyone with a warm smile and opened arms. Barbara was a devoted daughter, wife, mother, grandmother, great grandmother, and friend. Barbara was happiest when surrounded by her family at her home every Sunday afternoon and on holidays. The sound of children laughing and music playing gave her much joy. This world was a better place because Barbara was in it. Barbara leaves behind her loving and devoted husband of more than 62 years, Joseph A. DeMarco, Sr.; her heartbroken children, Joni (John) Grunow, Linda (Edward) Staveckas, Joyce (Robert) Ruffolo, Lisa Taylor, Kathleen (Patrick) Einwechter, Joseph A. (Debra) DeMarco, Jr. and Kris (Robert) Ford; her brother, James (Dorothy) Dressler; and Godson, Gerald Dressler, Jr. The grieving family also includes dozens of grandchildren and great grandchildren. Passing into Heaven before Barbara were her parents, Tony and Anne Dressler; her brothers, Gerald Dressler and Joseph Dressler; and her grandsons, Edward Staveckas, III, Brian Taylor, and Johnny Lopez, Jr. In her early years, Barbara was a member of the St. Nicholas School Drum and Bugle Corp and later was an adviser to the Oakcrest High School Marching Ambassadors. She was also a 4-H leader, instructing her members in the art of baton twirling, a legacy carried on by her daughters, Joni and Kathleen. Barbara also worked in the Mullica Twp. School for 21 years, making sure all the children ate a hearty and healthy lunch. No one ever went hungry when Barbara was around. Visitation will be held on Tuesday, November 15th from 9:00 to 11:00 AM with a Mass of Christian Burial at 11:00 AM at Our Lady of Perpetual Help Parish, St. Nicholas Church, 525 St. Louis Ave., Egg Harbor City, NJ. Interment will immediately follow at Egg Harbor City Cemetery. Arrangements have been entrusted to Wimberg Funeral Home, 400 Liverpool Ave. Egg Harbor City 609-965-0357. For directions or condolences, please visit wimbergfuneralhome.com In lieu of flowers, the family requests that any memorial gifts be made in Barbara’s name to Our Lady of Perpetual Help Parish, St. Nicholas Church in Egg Harbor City.

Barbara Anne DeMarco, nee Dressler, 81, of Mullica Township passed quietly into Heaven, surrounded by her family, on Friday, November 11, 2016. Barbara will be remembered as one of the most kind and caring people this world has known. She... View Obituary & Service Information

The family of Barbara Anne DeMarco created this Life Tributes page to make it easy to share your memories.

Send flowers to the DeMarco family.