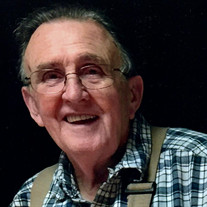 Arthur R. Wells Sr., 81, of Egg Harbor City, NJ passed away peacefully on Friday, February 7, 2020 at home surrounded by his loving family. Arthur was born on February 8, 1939 in Newark, NJ. He was a loving and caring father who will be greatly missed by those who loved him. He was the youngest of seven kids. Without a doubt he was a prankster and that trait was passed down to his son Arthur. He went into the U.S. Navy at the age of 17 and served in the “Gator Navy”. He was stationed on the USS Fort Snelling LSD 30 and was part of the evacuation of US Embassy personnel during the Middle Eastern crisis during the summer of 1958. After his stint in the Navy, he joined the U.S.C.G. He was stationed on the U.S.C.G Weather Cutter Spencer W36. Later, he was stationed at Little Egg Life Boat Station, Tuckerton, Toms River & Atlantic City NJ Coast Guard Stations after enjoying some time as a civilian. He later re-enlisted into the U.S. Navy and was sent to Vietnam as a “Sea Bee” for the Naval Mobile Construction Battalions and was picked to be a part of the Ghost Battalion Operation in Quang Tri Providence, Vietnam during the Vietnam War in 1967. He told many stories about his time in the Navy and Coast Guard. He was preceded in death by his father, David Wells; mother, Alma (nee Kronemeyer); siblings, Forrest Wells, Joan Campanarro, Gertrude Duardo, Gladys Wilkinson, Syvina Conklin and Louis Sprague; son, Christopher Wells; and his first wife, Rosemary. Arthur is survived by his wife, Gertrude (nee Luckas)Wells; sons, David Wells, John Wells, and Arthur Wells Jr. (Stephanie Ayres); daughter, Alison Wells (Ron Kramer); like a brother, Robert Tranchita; brother-in-law, Billy Sprague of North Carolina; Niece: Susan Lynch of North Carolina; nephew: Arthur Wilkinson (Jayne Wilkinson); grandchildren, John Wells Jr. and Christine Wells; great grandchild, Brooklyn Wells; and many other relatives Visitation will be held on Tuesday February 11th from 10:00 AM to 12:00 PM with a service at 12:00 PM at Wimberg Funeral Home, 400 Liverpool Avenue, Egg Harbor City, 609-965-0357. Interment will follow at the Atlantic County Veteran’s Cemetery. For condolences or directions, please visit wimbergfuneralhome.com

Arthur R. Wells Sr., 81, of Egg Harbor City, NJ passed away peacefully on Friday, February 7, 2020 at home surrounded by his loving family. Arthur was born on February 8, 1939 in Newark, NJ. He was a loving and caring father who will be greatly... View Obituary & Service Information

The family of Arthur R Wells Sr. created this Life Tributes page to make it easy to share your memories.

Send flowers to the Wells family.