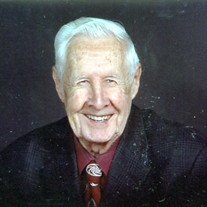 Anthony C Breder was born August 5, 1921. He passed away February 25, 2021 peacefully at home surrounded by his family. Andy was born in Egg Harbor City, NJ, where he lived all his life. He attended the Egg Harbor City School system where he played varsity basketball and baseball. He went on to play semi pro baseball for the EHC Vikings. Mr. Anthony Breder served in the US Army during World War II. He was a member of the 705 (Hell Cat ) Tank Destroyer Battalion. He received five battle stars and The Presidential Citation, the highest honor a unit could receive for participating in the Battle of the Bulge. They were nick named the “Besieged Bastards of Bastogne.” Mr. Breder became the unit’s German translator as they traveled through the Country in Europe. He remained an active member of the local American Legion as well a charter member of the Veterans of the Battle of the Bulge and the WWII Memorial Society. Mr. Breder and his wife attended many 705 Army reunions and they proudly hosted a reunion in Atlantic City in 1993. After the war, Mr. Breder became a self-employed paperhanger for over 60 years. In 1946, he married Eleanor Hohneisen and together they had three daughters. Cheryl (Warren) Wenger, Ellen (James) Sullivan and Nancy Carlson with whom he resided in his last years of life. He left behind six grandchildren, Jennifer (David), Patricia (Stephen), Mark (Samantha), Emily (John), Richard (Lauren), and Rachel (Eric). He also had 7 great grandchildren, David, Molly, Emmanuella, Giuliana, Christian, Payton and Elliotte. Along with many nieces and nephews. He was preceded by his parents, Anthony and Lena (Ade) Breder; his wife, Eleanor; his sister, Ethel (William) Herzog; his brothers, Arthur (Marge) and Robert (Kathleen) Breder; his brothers-in-law, William (Viola) Hohneisen, William (Mina) Pfeiffer and Thomas (Christine) Hamlin; and his great granddaughters, Lilly and Lana Carlson. In his younger years, he was an active member in the community. Mr. Breder was a lifelong member of the Egg Harbor City Moravian Church, where he served as head usher and served on the board of trustees as treasurer. He belonged to the Exchange Club, where he served as a past president. He was the first president of the Oakcrest Marching Band Patent’s Association. Visitation will be held on Tuesday, March 2nd beginning at 10:00 AM with the service starting at 11:00 AM at Wimberg Funeral Home, 400 Liverpool Ave, Egg Harbor City 609-965-0357. Interment will immediately follow at Egg Harbor City Cemetery. Donations may be made to the Moravian Church, 235 Boston Ave Egg Harbor City. For condolences or directions, please visit wimbergfuneralhome.com. Please join us live for the service at 10:45 AM on Tuesday, March 2nd at this link: https://webcast.funeralvue.com/events/viewer/49301

Anthony C Breder was born August 5, 1921. He passed away February 25, 2021 peacefully at home surrounded by his family. Andy was born in Egg Harbor City, NJ, where he lived all his life. He attended the Egg Harbor City School system where... View Obituary & Service Information

The family of Anthony C Breder created this Life Tributes page to make it easy to share your memories.

Send flowers to the Breder family.