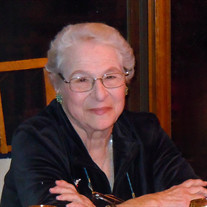 Annette (Arlette) Keiner passed away peacefully in her home, surrounded by loved ones. Annette worked side by side with her husband, Bernie in their electrical contracting business for over 50 years. Annette was born Arlette to Harry and Ethel (Wendkos) Waldman on December 2, 1928 in Atlantic City. She is survived by her children, Stephen (Marilyn) and daughter, Ila. She leaves behind the joys of her life, her grandchildren and great grandchildren from her son, David (Lisa) who predeceased her, Orly Rose (Jamie, Zinn, and Ro); Jason Max (Erica), and Joshua Harry; and her son, Stephen (Marilyn), Audra (Anthony) and Alexander. She was greatly looking forward to her granddaughter Audra giving birth to her baby girl in April. She is also survived by her sister, Marcia. Annette, known to all as “Nesty” lived life with joy and a sense of adventure. Her childhood stories of mischief and wild abandon are legendary in our family. At family gatherings, she was often encouraged to retell some entertaining story of her youth. Like flushing an Uncle’s straw hat down the toilet or hiding an Aunt’s false teeth before she had to leave for synagogue, many many stories. She knew more about movies, the actresses and actors than most anyone. She enjoyed being a resource for any of our questions. With her children, she loved singing songs from her youth. She loved cooking, especially baking, providing on request everyone’s favorite items. Annette brought her baked goods to her doctors and their office staff, and the library ladies to great acclaim. She loved to travel and did so with each of her children and most of her grandchildren through many countries in Europe. She traveled to Hawaii and drove with her daughter up the Pacific Coast Highway from Mexico almost to Oregon. She took cruises across the Atlantic up to Canada and down to the Caribbean. She was an avid reader often devouring a book in a day. She had great curiosity about the world, but mainly, her interests were in her children, grandchildren and great grandchildren. Everyone found her entertaining, charming and most unique. She will be greatly missed by many. Annette will be laid to rest at the Rodef Shalom Cemetery on Friday, February 16th at 1:00 PM and there will be gathering of friends and family for Shiva at her son’s home in Linwood immediately after. Directions will be given out at the cemetery.

Annette (Arlette) Keiner passed away peacefully in her home, surrounded by loved ones. Annette worked side by side with her husband, Bernie in their electrical contracting business for over 50 years. Annette was born Arlette to Harry and... View Obituary & Service Information

The family of Annette Keiner created this Life Tributes page to make it easy to share your memories.

Annette (Arlette) Keiner passed away peacefully in her home,...

Send flowers to the Keiner family.