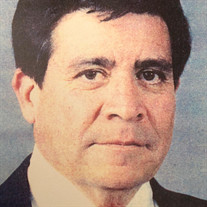 CHAVEZ, SR, #2011, ANDREW passed away surrounded by his loving daughter, Tracy; son, Andrew Jr, and wife, Martha, on September 11, 2018. Andrew proudly served four years in the United States Navy achieving rank of Aviation 2nd class and last station at Lakehurst Naval Base in Lakehurst, NJ. After serving in the US Navy, Andrew was accepted into the 68th New Jersey State Police Academy class in Sea Girt, NJ, and graduated as a New Jersey State Trooper in 1965. Andrew consider this accomplishment of his MOST valued and rewarding professions. He was committed to uphold the oath of “Honor, Duty and Fidelity” with pride and dedication. He LOVED being a NJ Trooper and achieved the rank of Lieutenant and Chief Polygraph Examiner for the State of New Jersey during his 30 years of dedicated service. After retirement, Andrew was appointed to be the Director of the Atlantic County In-Service Training Center for the local police service program (1996-2002) at English Creek, Egg Harbor Township, NJ. This position enabled him to continue to be involved in police education and training. Later, he was hired by the NJ Casino Control Commission in Atlantic City, NJ as an Inspector for nine (9) years. Andrew owned his own business in Polygraph and continued his polygraph expertise by conducting polygraph exams for law enforcement agencies and attorneys throughout the state of NJ. He attended Stockton University and graduated with a B.A. in Criminal Justice. Additional education provided by the NJ State Police was to attend the distinguished Keeler Institute of Polygraph in Chicago, IL. This provided the training necessary to become a Polygraphist for NJ State Police. This allowed Andrew to become a member of the NJ Polygraph Association. Andrew was highly enthusiastic to belong to the Knights of Columbus ,#6342-Villa Marie Council and held the titles of: Grand Knight, District Deputy and Faithful Navigator in the 4th Degree Color Corps. As a devoted Catholic, he enjoyed the Men of Malvern retreats for 30 years and shared this spiritual enlightenment along with his son Andrew, Jr, and his two grandsons. Andrew’s first and foremost privilege was being the proud parent of Tracy and Andrew, Jr.(Ann Marie) and sharing in the joy of their accomplishments and life and spending quality time with his two wonderful grandsons: Andrew, III and Ryan. He also enjoyed golf, spending time with his wife, Martha, and enhancing the landscape of their lovely home. Arrangements entrusted to the compassionate Wimberg Funeral Home in Galloway Twp. We will be forever grateful to the personal touch and empathy during this difficult time. Viewing on Tuesday, September 18th from 6:00pm-8:00pm at Wimberg Funeral Home, 211 E. Great Road, in Galloway, 609-641-001. For condolences please visit wimbergfuneralhome.com. A second viewing will take place on September 19th at St. Gianna Beretta Molla Parish (St. Bernadette Roman Catholic Church) from 10:00am – 11:00am at 1421 New Road, Northfield, NJ. Mass of Christian burial will follow at 11:00am. There will be a private family service on Thursday, September 20th at the Holy Cross Mausoleum. Tuesday, September 11, 2018, at 11:55pm, commemorates Andrew’s “END OF WATCH”.

The family of Andrew Chavez Sr. created this Life Tributes page to make it easy to share your memories.

Send flowers to the Chavez family.