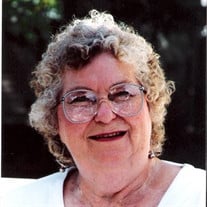 Ramp, Almeida Agnes (Lowe) McMullan, 96, was born Oct. 20, 1919 in Hackensack, NJ. She grew up in nearby Ridgefield Park. She lived in New York City before moving with her two small sons to her parents home near Egg Harbor City. She worked at Nurre's mirror factory and the Acme as a checker, when they still tallied everything with a pencil and paper. She later sewed for Pembroke's, making military uniforms. She met Edward Ramp, her future husband, when he came to plow a garden for her parents. They moved to Vermont where they had a dairy farm. They also lived in Ohio for a short time. The family moved back to Mullica Twp. in the early '50's, and lived on the same property until she died this week. Almeida loved to be busy, always creating something. She loved to knit, crochet, sew, embroider, bake and cook. She is famous for her homemade soups. Until very recently, she was still baking her own bread every week. Almeida was predeceased by her mother, H. Anne Weber Lowe; her father George W. Lowe, who pitched for the Cincinnati Reds baseball team in Chicago for a short time until he injured his arm; her son, Frank McMullan; her only sister, Philippa Scull; her husband, Edward Ramp; and her daughter, Susan Spero Hacker. She is survived by her son, Robert McMullan of Bardstown, KY; her daughters, Ann Fox, of Weekstown, Ellen Steffanelli, of Mays Landing, Judith Fischer, of Mullica Twp., Linda Clark of Little Egg Harbor, and Nancy Guckin of Burlington, NJ. She also has 16 grandchildren, 25 great-grandchildren and 2 great-great grandchildren. Visitation will be held on Monday, September 19, 2016 from 10:00AM to 12:00PM, with a service immediately following at Wimberg Funeral Home, 400 Liverpool Ave. Egg Harbor City, NJ (609)965-0357. Burial will be private. For directions or condolences, please visit wimbergfuneralhome.com.

Ramp, Almeida Agnes (Lowe) McMullan, 96, was born Oct. 20, 1919 in Hackensack, NJ. She grew up in nearby Ridgefield Park. She lived in New York City before moving with her two small sons to her parents home near Egg Harbor City. She worked... View Obituary & Service Information

The family of Almeida Agnes Ramp created this Life Tributes page to make it easy to share your memories.

Send flowers to the Ramp family.