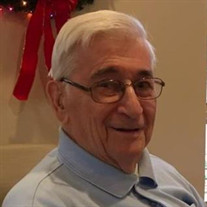 Alfred Rundio, 92, of Egg Harbor City, NJ passed away peacefully on April 4, 2020 in Palliative Care after a brief battle with the Corona Virus at the Atlantic Rehabilitation Institute in Morristown, NJ. Alfred was born in Egg Harbor City, NJ the youngest of nine children. He graduated from Egg Harbor City High School, where he was a member of the basketball team. Alfred served with honor in the United States Navy during World War II in the South Pacific. He was a member of the American Legion Post #158 as well as a member of the Veterans of Foreign Wars Post #5341. He worked at Pace Maker Boat Company and then Post Marine Yacht Company in Mays Landing, NJ, where he retired after 40 years a Paint Foreman. Alfred was life-long communicant of St. Nicholas Church, Egg Harbor City, and served as a faithful member of their ground crew and enjoyed camaraderie with the men of "Ray's Hut." He was a third-degree Member of the Knights of Columbus, Council #3500. Alfred was a loving husband, father, grandfather, great grandfather of twin girls, brother and uncle. He enjoyed all sports and especially basketball, baseball, and stock car racing. His hobbies were reading, sudoku and puzzles. Alfred is survived by his loving daughter, Dorothy Franken and husband, Kevin of Gillette, NJ and his grandsons, Brian and Kevin Jr., wife, Linsey with identical twin girls, Laci Regina and Lexi Ann. He had many nieces and nephews and grand-nieces and grand-nephews. Alfred was predeceased by his loving wife, Martha; infant son, Richard; parents, Joseph and Margaret Rundio; brothers Joseph, Paul, Henry, Lawrence; and sisters, Anna, Margaret, Louisa, and Theresa. In lieu of flowers, donations may be made in Alfred's name to Jack's Kids, c/o Somerville Elks, 375 Union Ave, Bridgewater, NJ 08807 www.jackskids.org. Arrangements have been entrusted to Wimberg Funeral Home, 400 Liverpool Ave, Egg Harbor City 609-965-0357. For condolences, please visit wimbergfuneralhome.com.

Alfred Rundio, 92, of Egg Harbor City, NJ passed away peacefully on April 4, 2020 in Palliative Care after a brief battle with the Corona Virus at the Atlantic Rehabilitation Institute in Morristown, NJ. Alfred was born in Egg Harbor City,... View Obituary & Service Information

The family of Alfred Rundio created this Life Tributes page to make it easy to share your memories.

Send flowers to the Rundio family.