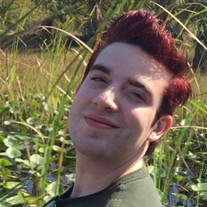 Alex Ernest Dougherty, 28, of Philadelphia, PA passed away unexpectedly on February 15, 2020. Alex “Lex” Dougherty was born on June 23rd, 1991 in Atlantic City, NJ to parents, Kathleen P. Dougherty (Russo) and John T. Dougherty. Lex went to Galloway Township Public Schools and attended Absegami High School in Galloway, NJ. Growing up, Alex was an active, adventurous, curious, and comedic child. Anyone who knew Lex would know that they were one of the most loving people you could meet. They were smart, always ready to debate, and would stick by their guns for what they were believed in. They always thought outside of the box, and had something quick-witted to add to any conversation. Lex was a TV, movie, comic, and video game enthusiast, a lover of art, music, and literature of any kind. Their personality was magnetic and their laugh was infectious, always a great addition to any group. Everyone was lucky to have Lex in their life because they would go out of their way to make sure you knew that they loved you and that you were cared about. Lex was a brave and proud gender non-binary individual, preferring to use non-gendered they/them pronouns. They confidently identified outside of traditional gender roles. They moved to Philadelphia, PA in 2016 and were an active, loved member of several communities. Lex was furthering their education while living in a new apartment with their loving partner, Jude Beltle. They spent their time together cooking, drawing, playing with their cat, dancing and singing their favorite songs. Lex enjoyed being with their friends and family from anywhere to going to soccer games, concerts, playing board games, trivia, playing Super Smash Bros or watching standup comedy. They were preceded in death by their loving mother, Kathleen Patricia Dougherty. Survived are their father in Oldsmar, FL, John Dougherty (Lynne), Brother in Galloway, NJ, Sean Dougherty, Sister in Absecon, NJ, Colleen Dougherty-Wolff (Robert), partner in Philadelphia, PA Jude Beltle, and adored by Aunts, Uncles, Cousins, and friends. We would like to let friends and family know that Funeral for Alex “Lex” Dougherty will be on February 22nd at Wimberg Funeral Home, 211 E. Great Creek Rd. Galloway, 609-641-0001. Gathering will take place at 10:00 am to 11:00 am followed by service at 11:00 am. For condolences, please visit wimbergfuneralhome.com.

The family of Alex "Lex" Ernest Dougherty created this Life Tributes page to make it easy to share your memories.

Send flowers to the Dougherty family.