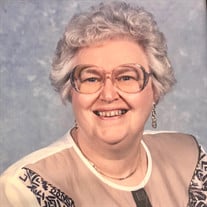 Alberta (Beppy) Butterhof, 87, of Mullica Twp., NJ passed away peacefully in her home June 21, 2019. She was born May 7, 1932 in Egg Harbor City. She attended Egg Harbor City schools and graduated from Egg Harbor City HS in 1950. She married William (Bill) Butterhof, in what he referred to as his greatest achievement, on June 27th, 1953 at Saint Nicholas Church in Egg Harbor City. After graduation she worked at Pembroke Clothing Factory in Egg Harbor City as a bookkeeper. When they closed, she went to work for DiPaolo Clothes in Hammonton. Immediately after completing her contract at DiPaolo, in 1980, she enjoyed many years working in the Mullica Twp. Board of Education District Office until her retirement in July 2006. Beppy, as she was known, also did the bookkeeping for her husband Bill’s store, Bufferhof’s Farm and Home Supply in the evening while working full time during the day. She was active in the St. Nicholas School PTA and remained a committed member of Saint Nicholas Church throughout her adult life. Beppy somehow balanced her work commitments with raising her five grateful children and doting on her grandchildren, great-grandchildren, great-great-grandchildren, and the many loved ones that she welcomed into her home. She hosted a yearly Christmas dinner that always turned into the best kind of ruckus and found friends and family returning year after year. Anyone stopping by for a meal or chat would find her happily humming a catchy tune or laughing at Bill’s corny jokes. Beppy loved her home town but enjoyed traveling with Bill and friends. She had the opportunity to see many places with the highlights being Sicily, Germany, Nova Scotia, Washington State, Alaska and Hawaii. When enjoying down time closer to home she enjoyed attending Phillies baseball games at Connie Mack Stadium and the VET in Philadelphia. Beppy is survived by her children Alberta (Beppy) Sweeney (John), Bill (MaryAnn), Paul (Pat), George (Anna), Michael (Terri); numerous grandchildren; great grandchildren; great-great grandchildren; and nieces and nephews. Beppy was escorted to Heaven by her nephew, John Mazetis (DOD June 20, 2019) and is predeceased by her husband, Bill and great-grandson, Murphy. Visitation will be held on Thursday, June 27th from 5:00 to 8:00 PM and again on Friday, June 28th from 9:30 to 10:30 AM at Wimberg Funeral Home, 400 Liverpool Ave, Egg Harbor City 609-965-0357. A Mass of Christian Burial will begin at 11:00 AM on Friday, June 28th at St. Nicholas Church, 526 St. Louis Ave, Egg Harbor City. Interment will immediately follow at Egg Harbor City Cemetery. For condolences or directions, please visit wimbergfuneralhome.com. Memorial Donations in lieu of flowers can be sent to the Cure Alzheimer's Fund at: https://curealz.org/outreach/in-memory/alberta-beppy-butterhof/ Checks can be mailed to: Cure Alzheimer’s Fund, 34 Washington Street, Suite 310, Wellesley Hills, MA 02481

Alberta (Beppy) Butterhof, 87, of Mullica Twp., NJ passed away peacefully in her home June 21, 2019. She was born May 7, 1932 in Egg Harbor City. She attended Egg Harbor City schools and graduated from Egg Harbor City HS in 1950. She married... View Obituary & Service Information

The family of Alberta (Beppy) Butterhof created this Life Tributes page to make it easy to share your memories.