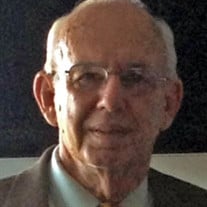 Albert A. Kuehner, 81, of Sweetwater, NJ passed on peacefully in his sleep, Tuesday morning, August 13, 2019 at home. Born in Egg Harbor City, November 19, 1937, he was the son of the late Albert and Rose Laubert Kuehner. His siblings, Joseph and Raymond Kuehner predeceased him. He is survived by his wife, Leona, his children, grandchildren, and nieces and nephews. Upon graduating from Egg Harbor High School, he worked at the Ideal Diner and later began his banking career at Collective Bank. Starting off as a teller, he rose through the organization retiring as an Executive Vice President. Not happy with retirement, he assisted in forming the new Select Bank and served on the Board of Directors. He also served as Assistant Fire Chief at the Sweetwater Volunteer Fire Department. Albert proudly served his country as a member of the National Guard. On October 13, 1962, Albert married Leona Komnath. They celebrated their 56th wedding anniversary this past year. They are the parents of two children, Johanna Kuehner Bernier and her husband, Charles of Sweetwater and Edward Kuehner and his wife, Karen (Flannery) of Ashley, PA. Albert was the grandfather of Joshua Christianson and his wife, Tricia of Somers Point, Brittany Christianson and her husband, Chris Ziphel of Egg Harbor City and Kylie Bernier of Sweetwater. And great grandfather to Kade, Hannah and Hayden Ziphel and Avery Christianson. Small planes Pilots license, boating Captain’s license, race cars, boating on the river, waterskiing and designing and building houses, term “big boys, big toys” applied to Al. An avid train collector he has a room just dedicated to his trains. Cars, boats, trains, tools, Al had them all. He would always say, “The one who dies with the most toys wins.” Al was the winner. Although Al and Leona were avid travelers, his favorite destination was McCormick Ave, where he enjoyed time with family and friends. A visitation will be held on Saturday, August 17th from 9:00 to 11:00 AM with a Mass of Christian Burial at 11:00 AM at St. Nicholas Church, 526 St. Louis Ave, Egg Harbor City. The family asks that in lieu of flowers, memorial donations be made to St. Jude Children’s Research Hospital at stjude.org. Arrangements have been entrusted to Wimberg Funeral Home, 609-965-0357 for condolences please visit wimbergfuneralhome.com.

Albert A. Kuehner, 81, of Sweetwater, NJ passed on peacefully in his sleep, Tuesday morning, August 13, 2019 at home. Born in Egg Harbor City, November 19, 1937, he was the son of the late Albert and Rose Laubert Kuehner. His siblings, Joseph... View Obituary & Service Information

The family of Albert A Kuehner created this Life Tributes page to make it easy to share your memories.

Albert A. Kuehner, 81, of Sweetwater, NJ passed on peacefully...

Send flowers to the Kuehner family.